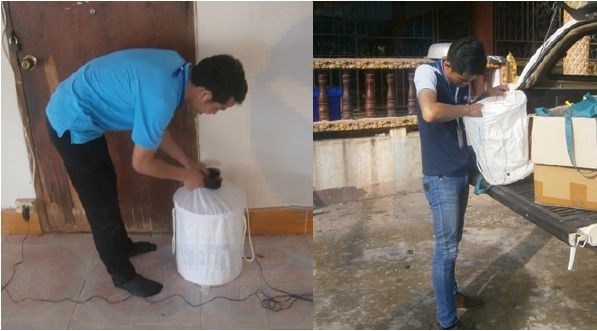 In Laos, vector-borne diseases that affect the military and local populations are often misdiagnosed and underestimated because surveillance networks, laboratory capacity, and clinicians’ knowledge are inadequate. In order to improve the level of knowledge regarding emerging and re-emerging vector-borne diseases in Laos, understanding the vector status of arthropod insects, together with their ecology and behavior, will provide useful information for further health-risk mapping and vector-control intervention. To improve adult vector surveillance systems, and to collect information on the ecology and behavior of the vectors, many devices with an attractant targeting a specific vector have been developed and used, including human-baited devices, CO2-baited devices, human lures, and pheromones. Although several devices with those attractants work well for catching the targeted vector, each type has its own limitations. For example, human-baited devices need to consider ethical issues and are human labor-intensive, CO2 is not available in rural settings, etc. Therefore, studies of simple trapping methods are needed in Laos.

In collaboration between NMRC-A Singapore and IP-Laos, a study to assess the comparative effectiveness of a heat-source lure (HSL) enhanced vector collection device has been set up.

In this final report, we included all activities and results from the first, second, and third reports on (1) laboratory mosquito behavior responses to the heat source, heat measures, and duration, (2) the first field test using CDC light traps with heat pads for arthropod collection in Khammouane province, (3) the second field test using BG sentinel traps with heat pads for Aedes mosquito surveillance in Vientiane capital, and also the third field test in the fourth trimester, using BG sentinel and CDC light traps for mosquito collection in a rubber plantation in Luang Prabang province.

A BugDorm-1 Insect Rearing Cage (30 x 30 x 30 cm, BioQuip) was used for testing in the laboratory. The cage was modified by making two holes (5 cm diameter) separately around 15 cm apart and installing small ports for trapping mosquitoes attracted to the heat source (Fig. 1).

Mosquitoes used in the test were adult females 1–3 days post-eclosion (emergence from pupa) that had been given the opportunity to mate, but had not taken a blood-meal. Ten to fifty females were transferred to the testing cage and deprived of access to food or water overnight before testing.  The heat pad was prepared by leaving it at room temperature for 15 to 30 mins after the adhesive backing had been removed. After that, the heat pad was put into a port, and the numbers of mosquitoes trapped in the small ports with and without a heat pad were counted during the 10 mins after the doors of the small ports were opened. For each repetition of the test, the heat pad was changed between each port. 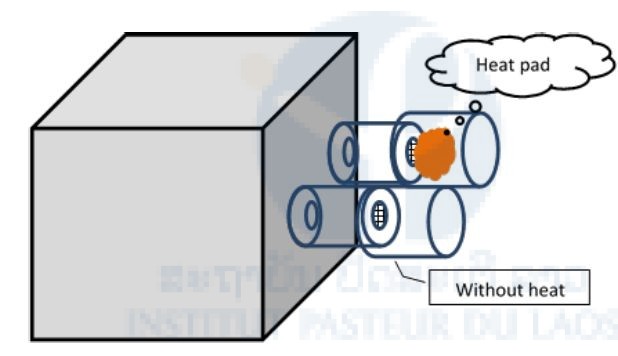 CDC light traps (model 1912, John W. Hock Company, USA) used with the supplied incandescent bulb were suspended from trees with the lightbulb 1.5 m above the ground. Mosquitoes attracted to the light trap were sucked into the collection container by a 6V (6Ah) battery-powered fan. For CDC trapping system that we used with heat pad only as mosquito attractant agent in the first and third field assessment, one adhesive heat pad was attached on the trap as figure showed below (Fig. 2). For CDC with heat pad and BG-Lure® as attractants, the heat pad was attached on the trap and BG-Lure® (see 3.5: the field assessment procedure below for the detail). 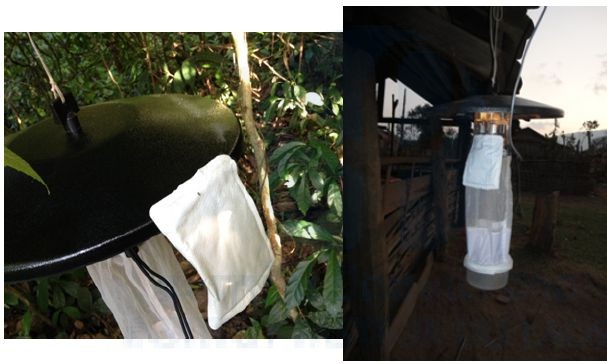 The BG sentinel trap (Model 7.5, Biogents, Germany) is an odor-baited counter-flow trap composed of a collapsible tubular container placed on the ground with the trap mouth opening upwards. The trap mouth opening is positioned 40 cm above the ground (Fig. 3). Air is drawn into this black funnel trap opening, which then passes across the solid BG-lure® inside the main body and is forced out of the trap top through the gauze surrounding the funnel. One or two heat pads were attached to the trap mouth opening for the BG trap system that used heat pad as mosquito attractant (Fig. 3) (see 3.5: the field assessment procedure below for the detail).

Our first field testing was carried out in Korbong village (Locality: 17.886484°N, 105.375129°E), The Watershed Management and Protection Authority (WMPA) area from 5th to 8th February 2016. Six CDC traps (three with and three without HS) were set each night for 3 nights, from 1700–1800 to 0600–0700 the next morning. Each trap was set separately at least 50 m apart, and each night traps with HS were rotated with traps without HS. Climate data were recorded using EL-USB-2 Lascar Humidity and Temperature USB Loggers during the testing period. During our study period temperatures ranged between 8°C and 19°C with a relative humidity of 31.5%–90%.

Testing procedure: Each Wednesday of each week, four BG traps were set at 2 pm and collected the next day, Thursday, at 2 pm (estimated 24h) in two of four villages (rotating between two villages each week). In each village, two locations were selected for setting up two BG traps, one inside and one outside. The traps were set at least 50 meters apart and each week traps with HSL were rotated with traps without HSL. In each site, two Ovi traps were set to confirm the presence of Ae. aegypti. The following substances were tested with BG sentinel traps: (1) Heat pad only; (2) BG-Lure® only; (3) BG-Lure® and heat pad; and (4) Nothing. Octenol was dropped from our test because the product was not available. Data sheets were used to collect all the data on each trap. 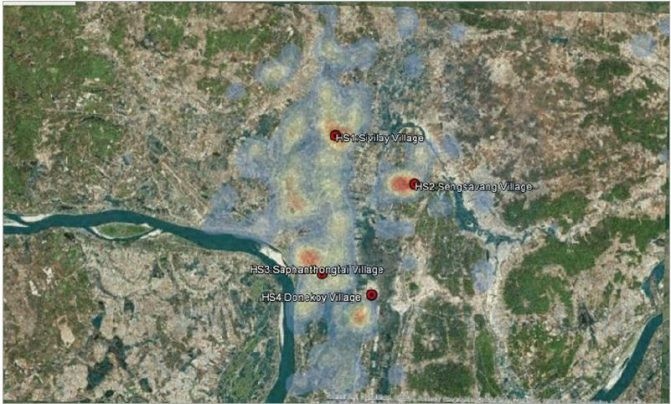 Our third field assessment was conducted during the rainy season (July 2016) in Luang Prabang province, Lao PDR. A rubber plantation (Locality: 19.676406°N, 102.106913°E) in Thin-Keo village, Xieng Ngeun district was chosen for day and night collections. During our study period, temperatures ranged between 22.5°C and 39°C with a relative humidity of 51%–95.5%.

Testing procedure: In July 2016, comparisons were made between the different attractants: (1) BG-Lure; (2) Heat pad; (3) Heat pad + BG-Lure®; and (4) None (no attractant) for BG sentinel traps, and (1) BG-Lure®, (2) Heat pad, and (3) None (no attractant) for CDC light traps in a rubber plantation for day and night collections. All collections were conducted outdoors. At the collection site, there was one parallel transect. On the transect, four BG traps and four CDC light traps were placed, positioned 30–50 m apart (eight traps). Each day, traps were rotated between the eight positions. Day collections were made for 10 days from 0700 to 1900 and night collections for 11 nights from 1900 to 0700. Data sheets were used to collect all the data on each trap.

For the first, second, and third field assessments, statistical analysis was performed with Stata version 11.0 software (Stata Corporation, College Station, TX). A chi square test was used to compare the numbers of mosquitoes collected by trapping systems with different attractants. Non-parametric tests were used to compare the number of female mosquitoes (non-normal distribution) collected by different trapping systems with different attractants and a geometric mean was calculated with a 95% confidence interval. A P-value less than 0.05 was considered to be statistically significant.

Heat measurement in the laboratory rooms, two replications, show that the temperature increased to above 40°C (41–43°C) in the first hour of data recording after removing the adhesive backing from the heat pads. The temperature increased slightly by around 3–4°C from the second to the sixth hours, then stayed quite constant between the seventh and twelfth hours with maximum temperatures at 45–47.5°C, and then decreased slowly to 40°C from the thirteenth to the sixteenth hours (Fig. 5).

Figure 9: Number of mosquitoes and Culicoides collected by CDC light traps with and without heat pad 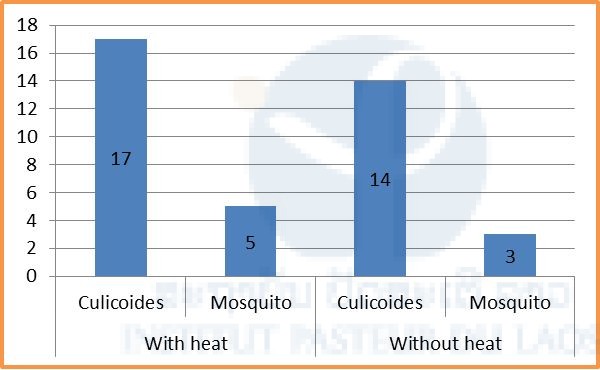 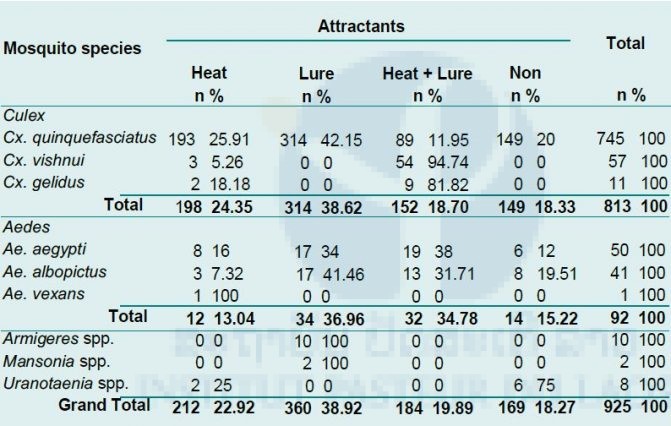 The results of statistical analysis using a Mann–Whitney test to compare the numbers of mosquitoes caught by each sampling system is presented in Tab. 3 below. It showed no statistically significant difference in total mosquito numbers, or in Aedes mosquito numbers considered separately, between the BG sentinel traps with different attractants (p > 0.05).

Table 4: Number of trap types with different attractants during day and night.

The results of statistical analysis using a Mann–Whitney test to compare the density of mosquitoes caught by each sampling system is presented in Table 6 below. It showed no statistically significant difference in total mosquito numbers, or in Aedes mosquito numbers considered separately, between the BG sentinel trap with different attractants (p > 0.05). For the CDC light trap, the number of mosquitoes collected was low, so data was not compared. 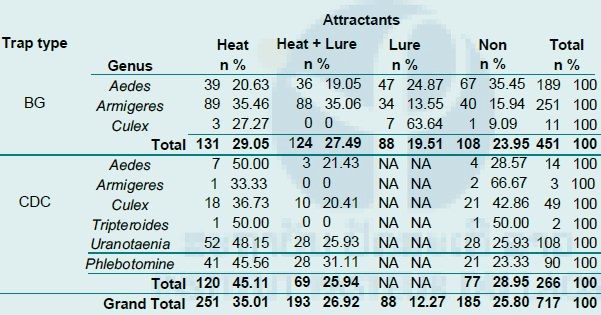 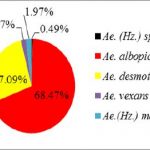 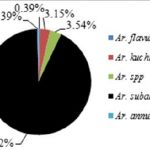 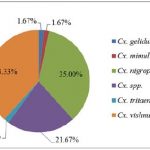 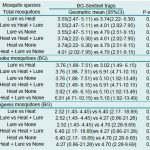 The results showed that heat pads could produce temperatures higher than 40°C over 16 h with maximums of 45–50°C, but the capacity for heat production seems to depend on ambient temperature. Seven replications of tests on Ae. aegypti females in the laboratory showed a higher number of mosquitoes captured in ports with heat pads. However, our tests were carried out in uncontrolled conditions and compared only heat and no heat in a small cage (30 x 30 x 30 cm). Further investigation should be done under standardized climatic conditions. Although the results from the two field trials using heat pads only and heat pads with BG-lure® showed no statistically significant difference in mosquito density, studies showed that female mosquitoes detect a variety of chemical and physical cues including body odor, CO2, moisture, heat, and visual contrast (Gibson and Torr 1999). It would be interesting to test further combinations of heat pads with other substances such as CO2, human odor, etc. in the field as, at present, there are no known attractants that can match the effect produced by human beings.