Background:
Annual dengue fever outbreaks and epidemics have ravaged Laos for decades causing severe mortality and morbidity, as well as significant economic loss. Institut Pasteur of Laos (IP Laos) has been focusing on dengue since its inception. In 2012, IP Laos established the first comprehensive surveillance network in Vientiane capital incorporating 4 civilian hospitals, as well as the military and police hospitals, providing diagnostic confirmation of dengue infections plus viral typing and sequence analysis to better understand the molecular epidemiology of dengue virus circulation in Lao PDR. Data obtained over the four years of surveillance could help the DCDC department of the Ministry of Health of Lao PDR to define a prevention strategy for 2016. As dengue surveillance is not fully coordinates yet (different analysis algorithms; interpretation of tests results; patients’ classification…), a clear overview of dengue circulation remains challenging at the  country level. 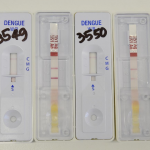 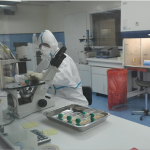 Trends of dengue circulation in Vientiane Capital 2012-2015
Dengue virus is under surveillance by Institut Pasteur du Laos since 2010 in Vientiane Capital with the cooperation of hospitals and private clinics in the city. The team is now a member of the UNITEDENGUE network. The strong mobilization of the clinician allowed collecting data over 4 years. These data permitted to establish the main features of dengue virus circulation. The main outcome of this permanent surveillance system was to evidence an efficient circulation of dengue virus outside the rainy season. This phenomenon has depicted for dengue virus serotype 1 (DENV-1) by the team of the LOMWRU of in rural areas in Lao PDR [Dubot-Peres, 2013].

This “inter rainy circulation” has been documented all over the period studied and all the four dengue serotypes were involved (Figure n°3, 4). Differences in amplitude have been recorded but were more likely linked to environmental variations from year to year rather than on virulence of the dengue viruses. 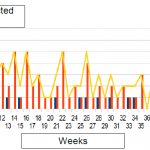 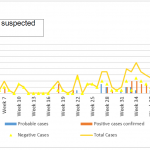 Dengue virus serotype 3 (re)-emerged in Vientiane Capital in June 2012 and spread out as a predominant serotype until November 2013 and suddenly disappeared (Figure n°5). Dengue 4 has been detected at a very low level in Vientiane suburban areas but surprisingly increased in late 2013 and was at the origin of early cases in the city in early 2014 (Figure n°6).

In 2015, autochthonous cases of DENv-4 cases were again detected in the city. DENv-1 reappeared as the predominant serotype in 2015 (Figure n°7). 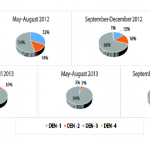 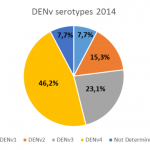 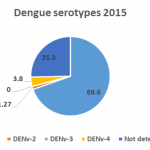 Molecular epidemiology help understanding the features of dengue virus circulation in Vientiane Capital. It has been established that DENv-1 strains that circulated between 2010 and 2013 were linked to two independent introduction events whereas DENv-2 strains were maintained over the same period.

The former DENV-3 genotype II strains at the origin of the 2012-13 epidemic displayed strong genetic relations with strains identified in Myanmar between 2005 and 2009 [Lao, 2014]. The emergence of a second DENV-3 genotype (genotype III) has been evidenced during the 2012-13 outbreak. These strains shared high identity levels with DENv strains from Buthan and India highlighting the complexity of the emergence pathways in Vientiane [Lao, 2014].

Dengue 4 strains are under investigation to establish their origin. The 2015 DENv isolates (serotypes 1,2,4) are also under study to determine whether they derived from past autochthonous Lao strains or link to a new introduction event.

These data revealed that, as a possible consequence of the city development and the increasing population exchanges at the regional level, DENv strains circulating in Vientiane Capital are both endemic and imported strains.

Zika virus
Zika virus  was first isolated in Uganda in 1947 from a sentinel monkey stationed in the Zika forest. In Asia, the presence of Zika virus has been suspected since the 1960s in India, Malaysia, Northern Vietnam and the Philippines (Figure n°8). The prototype strain of Zika virus in Asia has been obtained in 1981 from a pool of female Aedes aegypti 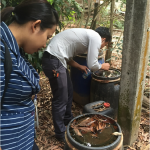 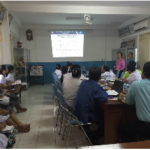 trapped in a small town in West Central Malaysia. Since than, only few sporadic cases, either autochthonous or imported from Asia in Western countries, have been reported in the Indochinese peninsula. Until now, no evidence of Zika virus in Lao PDR exists. In 2012-13, Lao PDR experienced a huge dengue epidemic but 20 to 50% of the etiologies of dengue like syndromes recorded remain to be determined.  We report the detection and the preliminary genetic characterization of Zika virus isolated from patients suspected of dengue. These data evidenced the cocirculation of Zika and dengue virus a local circulation of the virus and its role as an alternative etiology of dengue like syndrom in Laos.

A total of 1353 patients sampled from June 2012 to September 2013 were tested for Zika virus by real-time SybrGreen RT-PCR (Figure n°9). Among them, 18 (1.3%) gave a positive signal by RT-PCR. The virus was diagnosed in 17 Lao residents of Vientiane Capital. None of them reported an stay in a foreign country or in an other province of Lao PDR during the three weeks that preceded symptom onset. The last positive signal was found in an expatriate returning from Thailand. As shown in Figure n°9, Zika virus circulated in Vientiane Capital at least over a period of 15 months. All  PCR products displayed a melting temperature (Tm) slightly different from Tm obtained with the Senegalese prototype.

Single Zika virus infection represented 61.1% of the cases. Of the 7 (38.9%) dengue-Zika co-infection, six of seven corresponded to Zika-DENV3 co-infections, the last one remains to be determined. 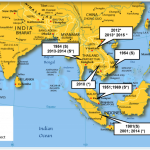 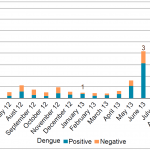 Our retrospective study provides the first evidence of Zika virus in Lao PDR. Positive cases were found in patients with a clinical suspicion of a dengue infection. Most of the cases corresponded to single Zika virus infection. Lao PDR faced a continual circulation of dengue virus from 2012 to the end of 2013. Thus, dengue-Zika co-infection could be expected. Such co-infections have already been reported but our series appears as the largest recorded upon now. Interestingly, a co-infection has also been recorded in an imported case from Thailand. This last country also experienced a huge dengue outbreak. Since 2012, an active circulation of Zika virus has been proven in residents of different provinces of Thailand and in tourists returning from this in 2013 and Zika cases were recorded in different provinces. Since 2010, different countries in Southeast Asia reported sporadic cases of Zika virus but no data was available for Lao PDR. These preliminary data shade the light on a new virus in Lao PDR that should now be include in the routine differential diagnosis of dengue like syndroms. Sequence comparison will help understanding how the virus circulated in Vientiane Capital and at the regional level.