Due to an unprecedented workload with numerous samples arriving at Institut Pasteur du Laos and the various public health duties, the Administration and Virology team have not been able to answer numerous requests for interviews and journalistic solicitations as we need to prioritize the urgent public health mission. 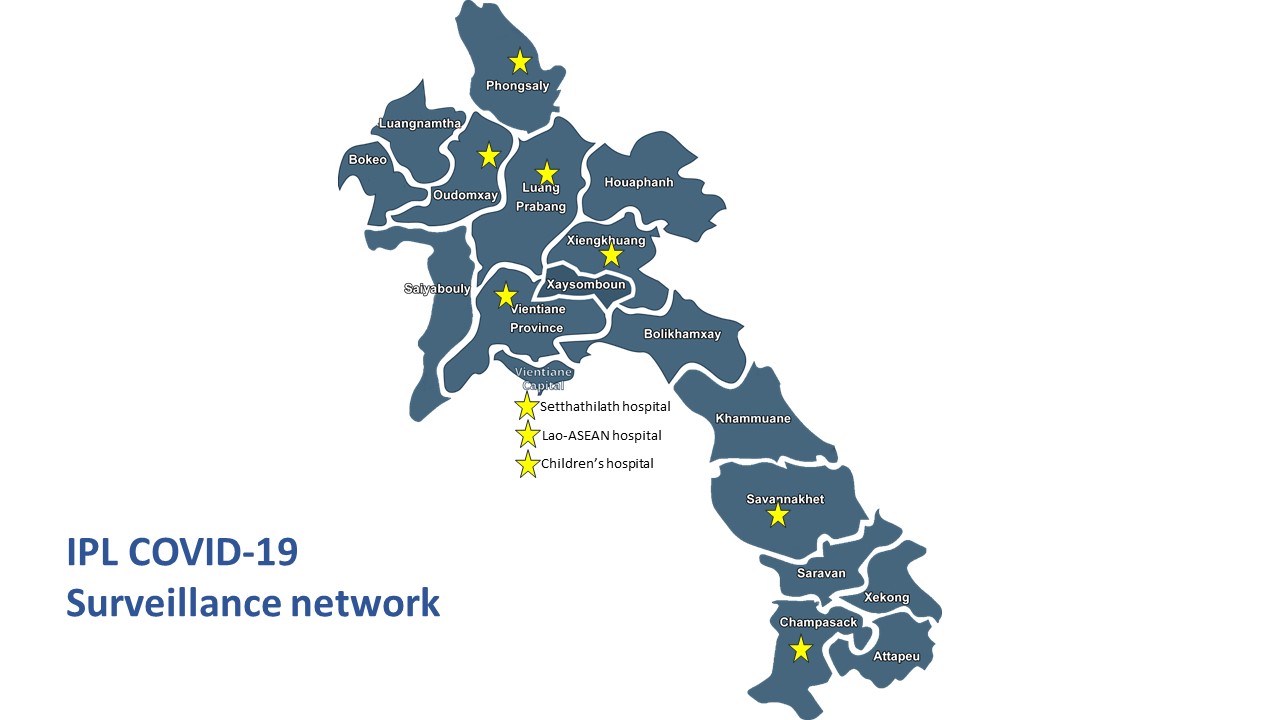 Samples are received from the hospital network arrive at IPL and are analyzed under adequate biosafety / biosecurity conditions within the Institut Pasteur Laos BSL-Plus laboratory the highest biosafety level laboratory in Laos.

The testing of suspected case samples takes around 4 hours in order to extract the SARS-CoV-2 nucleic acids and to amplify the viral genomic material using Real-Time PCR. Positive and negative results are reported to the Lao Ministry of Health – International Heath Regulations contact person who then relays the result to the clinician/patient and to the World Health Organization.

Each test has a relatively high cost of $15 US dollars and the equipment for sample preparation and analyses is also expensive. Patients sample testing is done free of charge.

In addition to Public Health diagnostic work on suspected COVID-19 cases, Institut Pasteur du Laos is also working on: Tracking the origin and transmission/spillover of the new coronavirus SARS-CoV-2

In their article on the Global Epidemiology of Bat Coronaviruses, Wong and colleagues (Viruses 2019 11,174) made a strikingly predicted the emergence of SARS-CoV-2! They wrote in their article, “the presence of live bats in wildlife wet markets and restaurants in Southern China, are important for interspecies transmission of CoVs and may lead to devastating global outbreaks”. As their words went to press, their prediction materialized in a wet market in Wuhan, China where bats, and other species of wildlife were for sale in anticipation for the up-coming Year of the Rat Spring Festival.

Before the original SARS epidemic (SARS-CoV-1), bats were not known to be hosts to coronaviruses (CoVs). However, in the past 15 years bats have been found to be hosts to >30 CoVs with complete genome sequences (Wong et al., Viruses 2019 11,174).  As a result of their unique mechanism of viral replication, CoVs have a high frequency of recombination and mutation rates, which allows them to rapidly adapt to new hosts and ecological niches (Graham et al., J. Virol. 2010 84, 3134). Given the numbers of alphaCoVs and betaCoVs already found in a plethora of bats species, it is obvious that these viruses have found a suitable host reservoir in Chiroptera. Bats are the only group of mammals capable of sustained flight, which allows them to disseminate the viruses they harbor and enhance the chance of interspecies transmission (Wong et al. Viruses 2019 11,174). That said, this is certainly not the only avenue of viral dissemination by bats; human capture of bats for food, and hematophagous arthropods, via mechanical transmission, may also play important roles in CoVs viral propagation in and around bats. It is common knowledge that Laos, Vietnam and Cambodia are the epicenter for illegal wildlife trade in Southeast Asia, where a vast variety of lucrative wildlife including bats are clandestinely shipped to wet markets of China.

Institut Pasteur of Laos (IP Laos) and National Institute of Hygiene and Epidemiology (NIHE) in Vietnam, as well as Chinese partners, lead by Institut Pasteur de Shanghai – Chinese Academy of Sciences (IPS-CAS) and Institut Pasteur of Cambodia (IPC) are strategically positioned as an interactive One-Health Research Network to investigate the origins and transmission mechanisms of SARS-CoV-2. Their field and laboratory experience provide this network with a unique opportunity to explore the origin and spillover events of SARS-CoV-2 and other SARS-like-CoVs.

Hence, a better scientific understanding of the origin, natural history and dispersal of SARS-CoV-2 and SARS-like-CoVs in their natural environment, as well as the mechanisms leading to their interactions and interspecies jumping: Bat-Bat; Bat-Animal and Bat-Human are paramount to mitigate future spillover events that result in devastating epidemics like the one we are witnessing today with SARS-CoV-2 in China and around the world.

At present the Lao PDR is in full lockdown due to the COVID-19 epidemic in-country and around the world, but when the epidemic in Laos subsides our research teams will return to the field to investigate the presence of SARS-CoV-2 in bats and other wild animals (catch- sample- and release) suspected as being possible reservoirs or recipient intermediate animal hosts (e.g. pangolins, snakes).