Background
A seroprevalence study was carried out by our IPL team in 2013 to determine the post-epidemic prevalence of Chikungunya virus in the Southern province of Champasak. A follow-up of participants was organized to evaluate the impact of post-chikungunya chronic arthralgia. Of the volunteers who were interviewed and retested in 2014, 56% were found positive for anti-chikungunya virus antibodies, confirming the high attack rate suggested by the seroprevalence study performed in 2013. Within the confirmed cases, 39,6% declared suffering recurrent arthralgia.

In collaboration with the Parasitology unit of IPL, the opportunity was taken to collect stool samples to update knowledge on helminthes carriage in Southern Laos. Prevalence of helminthes carriage recorded reached 80%  with multiple species identified in 38%. Stool examination evidenced the presence of three different groups of helminthes: (i) Nematodes (39,6%), (ii) Cestodes (5,2%) and Trematodes (66,4%). A total of eight different species could be identified with two dominant species, Opisthorchis viverrini, Ankylostoma duodenal (29,5%). Up to 48% of the volunteers admitted using antiparasitic treatment, suggesting that the prevalence, abundance and diversity of worm species may be underestimated.

Dengue and chikungunya virus surveillance in Southern provinces
Dengue-like syndromes were reported in different Southern provinces of Laos in early 2014. The highest incidence rates were recorded in Salavan, Attapeu and Champasack. However, no lab investigations were performed to identify the etiologies. IPL offered its support to other institutions or provincial hospital to document these cases. The Lao-Oxford-Mahosot- Wellcome Trust Research Unit (LOMWRU) shared samples collected in the course of a chronic febrile syndrome project. Among the 4 samples that matched a dengue-chikungunya case definition, one was found positive for dengue NS1 antigenemia.

A total of 93 samples from patients hospitalized in the provincial hospitals of Champasak and Attapeu were analyzed by RT-PCR for real-time Chikungunya RT-PCR. Among these, 1 was found positive and the virus was isolated. The presence of anti-CHIKv IgG was shown in 33.6% of the patients.  None of them was found positive for dengue.

Altogether, these results indicate that multiple etiologies, including different arboviruses, are the origin of dengue-like syndromes in Southern Lao provinces. 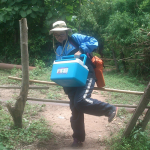 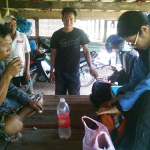