Research program funded by the US DOD In collaboration with NMRC-A, Singapore. 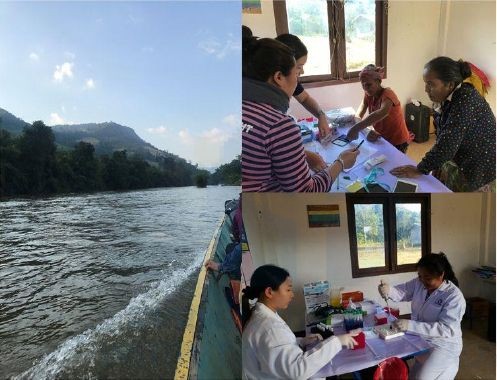 Blood samples from 41 volunteers, collected in remote village populations in Khammuan Province, were investigated by in-house ELISA for the presence of anti-flavivirus antibodies (Table 4). In this limited series of samples, 39% (16/41) of the volunteers were found positive for anti-flavivirus IgG. Interestingly, three of them (18%) displayed a serologic response restricted to the Japanese encephalitis antigen. Neutralization tests are now needed to determine the specificity of the antibodies. A second line of tests has been planned to explore the possible exposure of this remote population to alphaviruses and selected members within the Bunyavirales.

RNA purified from volunteers’ plasma was screened for pan-genus (i.e. alphavirus; flavivirus and phlebovirus) using conventional RT-nested PCR. All 41 plasma samples tested were found negative for all three pan-genus RT-PCR. These preliminary results were obtained on asymptomatic subjects. The follow up of this population will allow an increase in the number of participants but these preliminary results suggest that at least several flavivirus could be at the origin of human infections in this area. The arbovirus spectrum has been identified but their actual pathogenicity to humans remains to be determined.