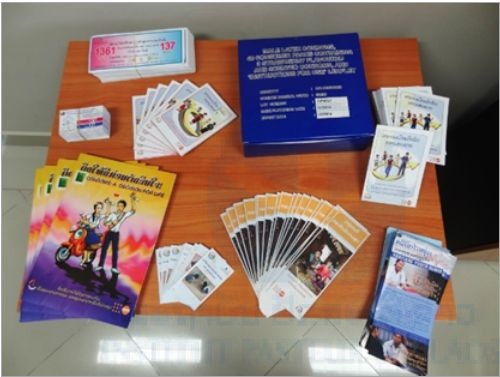 Hepatitis B virus (HBV) is mainly transmitted by blood Results transfusions, unsafe injection practices, tattooing, occupational hazards, sexual risk behaviors, or mother-to-child in the perinatal period. In Lao PDR, the seroprevalence of chronic HBV as indicated by the presence of surface antigen (HBsAg) has been estimated at 6-9% (blood donors and the general population), while the rate of exposure to HBV, as measured by the presence of anti-HBc antibodies, reaches 40% to 50% in the adult population.

Hepatitis C virus (HCV) is mainly acquired through blood exposure, via transfusions, use of unsafe injections in health care settings and by drug abusers. Sexual transmission and mother to child transmission are infrequent. The prevalence of anti-HCV antibodies has been estimated at 1.1% among Lao blood donors.

In Southeast Asia, most chronic HBV carriers have been infected at birth or during infancy. Later in life, infections with HBV as well as HCV infections may be indicative of the aforementioned risk behaviors. Young female factory workers in resource-limited countries such as Lao PDR could represent a particularly vulnerable population with an enhanced risk of exposure to these infections. Indeed, women from remote villages, with low level of education, may find themselves in difficult working and living conditions, away from the protective environment of their family and community, and at risk of human and sex trafficking. Health data about this vulnerable group are limited. Risk factors for infectious diseases among factory workers have never been studied in Lao PDR. Furthermore working conditions in garment factories supplying international markets have raised international criticism.

For these reasons, we conducted a cross-sectional study to determine the prevalence of hepatitis B and C virus infections and associated risk factors in female workers employed in Lao garment factories in Vientiane capital where a large number of such factories are located. The five largest garment factories were selected. Four hundred women were enrolled, corresponding to almost 10% of all female workers employed in the 5 factories.

In each factory, the participants were randomly selected from the Lao trade union list, proportionally to the total number of women employed. The questionnaire included socio-demographics (age, income, education level, province of origin, family status), knowledge about HBV and HCV infections (in particular, routes of infection), risk behavior and practices of prevention.

Nearly a third of women (31.5%) were aware of HBV but none had heard of HCV. Very few knew about the routes of transmission of HBV and HCV, the symptoms or complications caused by these viruses, including liver failure, cirrhosis and cancer. The ability to cure hepatitis B was known by 5.25%, but less than 1.0% knew how to protect themselves from HBV infection. Importantly, only 6% were aware of the existence of vaccination against HBV.

Among factors of blood exposure, 13% of women reported a surgical history, 4% had received one or more blood transfusions and 26% mentioned behaviors or risk activities such as tattoos, piercings, injected drug use and reuse of needles.
About the risk of sexual transmission, of 269 women who had at least once sexual relationship, 57 (21.2%) had more than one sexual partner and 146 (54.0%) did not use condoms.

Six workers (2%) had had sex for money and 27 (10%) reported a history of sexually transmitted infection (STI).

Prevalence of hepatitis B and hepatitis C markers

Table 1. Serological markers of hepatitis B and C

In the final model of multivariate analysis, three factors emerged as being significantly associated with the presence of anti-HBc: living in a dormitory, having more than one sexual partner, and a history of abortion.

Several findings in the study confirmed the vulnerability of our cohort: (i) half of the participants were housed in dormitories of the factory, (ii) their level of education including their knowledge in preventive health was low, (iii) their wages were low (about 1.2 million LAK or US $ 150 per month). Furthermore, all of these women were born well before 2001, when routine hepatitis B vaccination was introduced in the Expanded Program on Immunization of Lao PDR. All these factors foreshadowed a higher seroprevalence of markers of infection with HBV and/or HCV in these female workers than in the general population.

Regarding the seroprevalence of HBsAg, the rate of 4.0% is unexpectedly low. Indeed, most serological surveys conducted in Laos find rates of HBsAg carriage higher or equal to 8%. This discrepancy could reveal some difference in the risk of exposure to HBV infection between the urban and rural components of the Laotian population. In rural areas, population densities are lower and the risk practices, such as multiple sexual partners or behaviors involving exposure to blood contamination, may be lower than in cities. Similar differences have been reported in Gabon with a higher prevalence of chronic HBV in urban than in rural areas.

Interestingly, almost half of the participants (46.8%) are anti-HBc positive, which is close to the rates found in Lao PDR among women of similar age or in blood donors. HBV infections acquired later in life, after childhood, are generally cleared without progression to chronic disease and cirrhosis. Hence the high anti-HBc positivity paired with a low HBsAg prevalence may reflect late HBV exposure after migration from the countryside to the city. This is consistent with our observation that anti-HBc positivity was significantly associated with risk factors for sexual transmission (multiple sex partners, history of abortion) and with dormitory accommodation. It is unlikely that sexual transmission occurs in the dormitories, but such an accommodation may promote risk behaviors such as spending nights outside with casual partners. Unlike the carriage of HBsAg, the seroprevalence of anti-HCV antibodies (1.7%) was close to the previous estimate of 1.1% in Lao blood donors.

Overall, the fear of discovering high rates of chronic HBV and / or HCV infection in this representative sample of Lao female workers has been belied by our findings. However, this does not rule out the reality of exposure to HBV infection for this vulnerable population.

Given this fact, several preventive measures could be implemented. First, routine vaccination against hepatitis B should be implemented upon hiring by the occupational health services, since at least 50% of these women may be susceptible to HBV infection. Second, although it does not appear significantly related to the prevalence of anti-HBc, the low level of knowledge in this female working population should also be addressed by the preventive interventions. Educational programs for health must focus in particular on the prevention of STIs and the danger of high-risk practices of blood exposure. Third, regarding the lifestyle of women workers, low-cost interventions could reduce the risks linked to their accommodation by making dormitories more attractive and user-friendly, and avoiding women to become exposed outside the factory. This is a topic for research in the field of public health clearly worth exploring.

More generally, this study highlights the need to develop occupational health in Lao PDR, especially for women workers in garment factories, with a focus on information and prevention in the field of communicable diseases and reproductive health.

These data are published as “Seroprevalence and risk factors of hepatitis B and C virus infections in female workers of Lao garment factories” Xaydalasouk et al. Plos One, July 2018