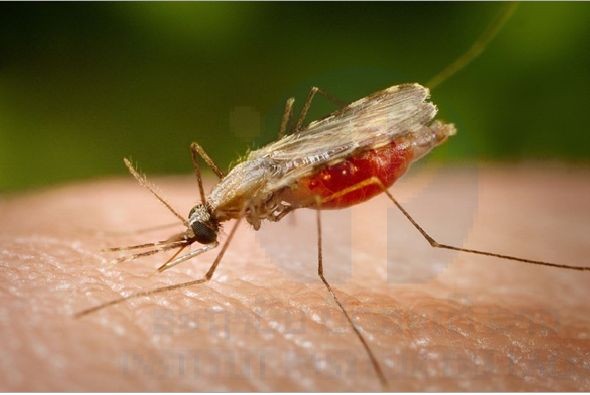 Insecticide resistance in malaria vectors in South-East Asia represents a serious threat to the achievements obtained in malaria control during recent years. It is important to identify the distribution, levels, mechanisms, and potential environmental factors of resistance in malaria vectors in the lower Mekong countries to assist health authorities to develop effective prevention and control strategies for the disease. Furthermore, there is a general lack of knowledge about the composition, distribution, and host-seeking behavior of Anopheles mosquitoes, especially of sibling species, in the region. Even less is known in malaria hot spots, such as forest areas, and the role of these species in malaria transmission in these areas. In addition, a general lack of expertise in general entomological methods, mosquito identification, insecticide resistance detection, and surveillance further exacerbates the situation.

The MALVEC project, Characterization of insecticide resistance in malaria vectors in the Lao People’s Democratic Republic and Thailand and capacity building in medical entomology, was carried out in the Lao PDR and northeastern Thailand during 2013–2016 with the overall objective to improve strategies for prevention and control of malaria. The specific objectives were to: 1)

Evaluate the bionomics and distribution of malaria vectors and their role in malaria transmission; 2) Evaluate the level, type, and mechanisms of insecticide resistance in malaria vectors to conventionally used insecticides; 3) Evaluate the impact of environmental determinants on vector dynamics and insecticide resistance selection; 4) Build capacity in medical entomology in the Lao PDR and Thailand. As such, the project follows the recommendations of the Global Malaria Action Plan (GMAP) to set up active systems of surveillance of insecticide resistance in vector populations to strengthen the prevention and control strategies against malaria at the global scale. The project was funded by the 5% Initiative of the Global Fund for Malaria, Tuberculosis, and HIV/AIDS and was allocated approximately one million euros for three years. 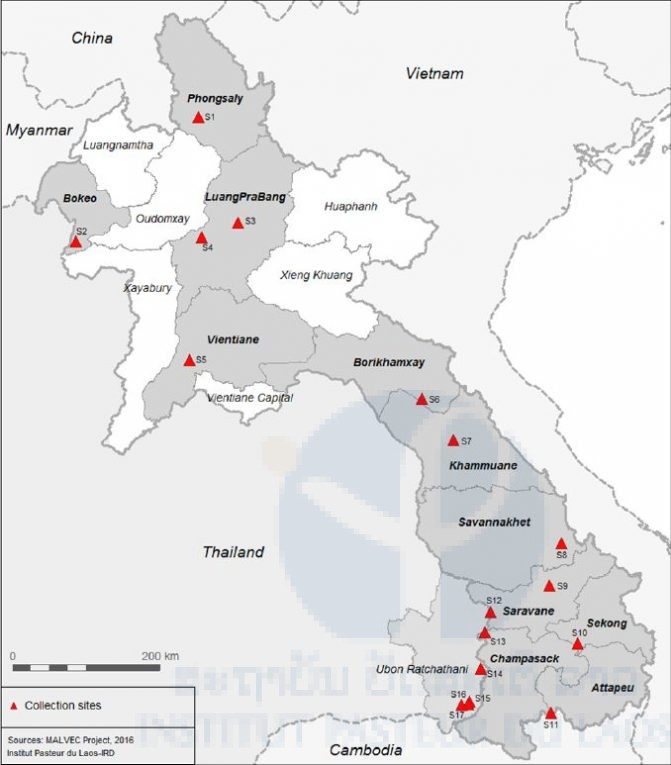 Figure 1. Location of mosquito collection sites during 2013–2015 in Thailand and the Lao PDR

Bionomics and distribution of malaria vectors and their role in Plasmodium transmission
There was a great Anopheles mosquito abundance and diversity in the study areas with more than 24,000 specimens of at least 27 different species (or species complexes) collected on both human and cow bait in both countries (Table 1). In addition, molecular identification revealed 13 sibling species within the main primary vector groups (Leucosphyrus, Funestus, and Maculatus groups, Figure 2). Mosquito abundance was much higher in the rainy season than in the dry season. In the Lao PDR, the primary malaria vectors (An. dirus, An. maculatus and An. minimus) were present in all study sites during both the dry and rainy seasons, indicating that people living in these rural areas are constantly exposed to malaria vectors throughout the year. In the Lao PDR, the primary vectors, An. minimus and An. maculatus, were highly zoophilic, but they still bit humans throughout the night with a high peak of activity before midnight, both indoors and outdoors (Figure 3 and 4). 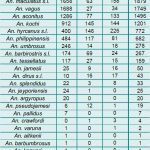 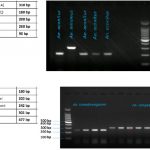 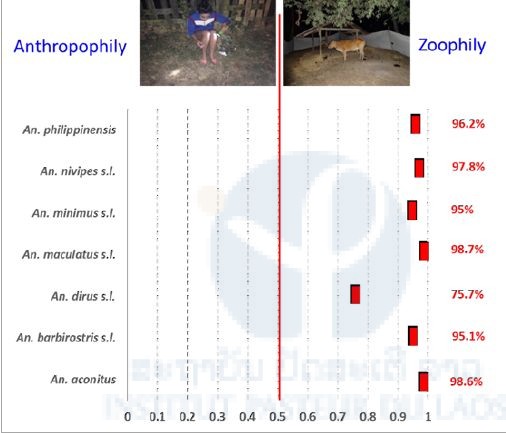 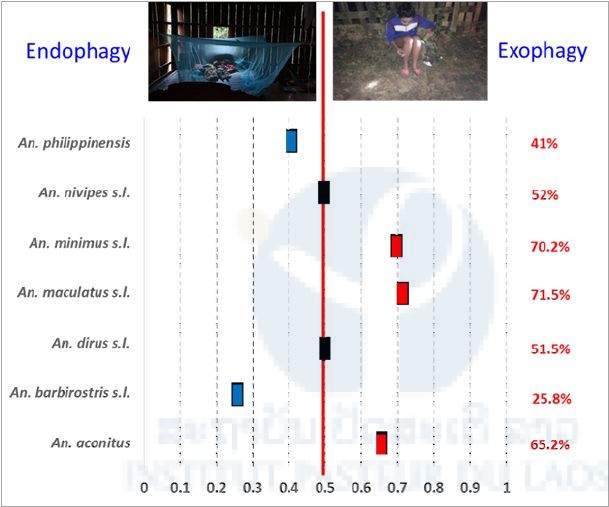 Overall, 22% of the malaria vectors were collected between 10:00 PM and 5:00 AM indoors when people are sleeping. Although this is a low percentage, it shows the need for use of bed nets during this period of the night (Figure 5). Twenty-seven percent of primary and secondary vectors were collected outdoors at times when people are usually awake and outdoors (before 10:00PM or after 5:00AM), which shows that people are exposed to potentially infectious mosquitoes and the importance of personal protection at these times. Anopheles dirus is considered as a major malaria vector in the Lao PDR but very few specimens were collected (n=43), which could be explained by its breeding sites usually being located in forested areas and rarely in villages. On the other hand, in the Thai sites along the border with the Lao PDR, there was an extremely low abundance of malaria primary and secondary vectors. However, in forested areas An. dirus was the predominant species biting humans and the human biting rates of this species were more than 30 times higher than in village locations (0.91 vs. 0.03 mosquito bites per person per night). More than 6,400 mosquitoes were tested for Plasmodium presence in both countries and only two specimens were positive; one Anopheles aconitus from Phongsaly province and one An. minimus s.s. from Vientiane Province were infected with P. falciparum, a sporozoite rate of 0.03% (2/6431). Low sporozoite rates are common in the Lao PDR and Thailand, but also reflect the low number of collections (only four nights during the dry and rainy seasons per year) and the very zoophagic and exophagic behaviors of these mosquitoes. This shows again that the transmission may occur outside  the villages in forested areas. Additional tools to target outdoor biting mosquitoes are urgently needed for efficient vector control. 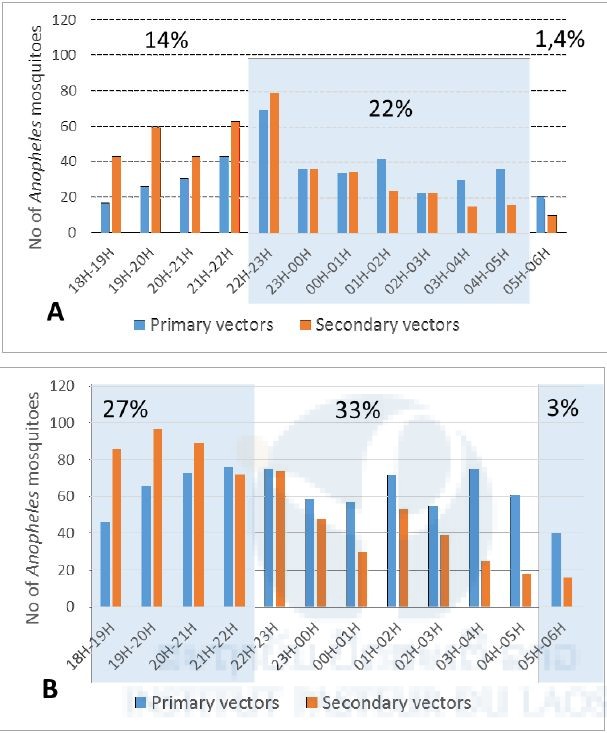 Figure 5. Biting times of the malaria vectors on humans indoors (A) and outdoors (B) in Lao PDR.

Insecticide resistance in malaria vectors in both countries was rare (Figure 6). Only An. maculatus s.l. from Phongsaly and Luang Prabang and An. nivipes from Sekong showed a reduced susceptibility to permethrin. However, reduced susceptibility to DDT was found in several non-vector or secondary vector species (An. vagus, An. philippinensis, An. nivipes, An. kochi, An. tesselatus) throughout the Lao PDR, but also in primary vectors (An. maculatus s.l. and An minimus in Luang Prabang). These results show that vector control using traditional insecticides is still effective in the Lao PDR, but continued resistance monitoring is necessary to detect potential resistance development at an early stage. Results from Thailand show that the primary vectors are susceptible to all insecticides tested, although sufficient specimens could not be collected for the WHO requirements of complete tests (n>100). Except for a potential resistance in An. barbirostris s.l., all the other secondary vectors were susceptible to pyrethroids and DDT. The only mosquito species with sufficient numbers to make complete bioassays in Thailand was the An. hyrcanus group.

All tests indicate a high degree of resistance of this species group to all insecticides tested. No kdr mutation was detected in any of the Anopheles species tested in the two countries, hence suggesting possible involvement of metabolic resistance. The use of two synergists (PBO and DEF) on the An. hyrcanus group in Thailand strongly increased the efficacy of both permethrin and deltamethrin, hence demonstrating the role of the mono-oxygenases and esterases in pyrethroid resistance. Research on insecticide resistance mechanisms is important to improve the surveillance and management of insecticide resistance and to guide national authorities in vector control policy. 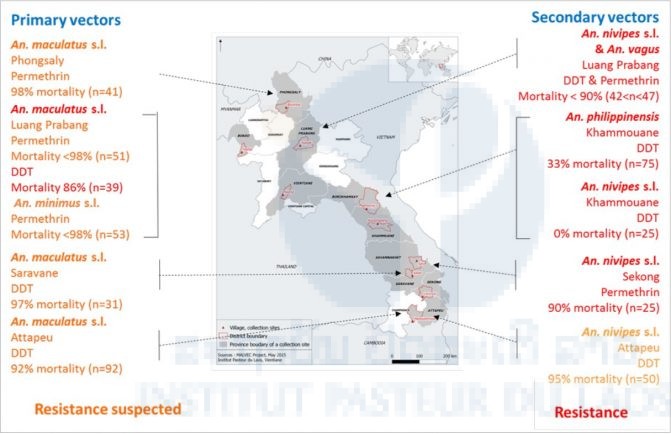 Figure 6. Distribution and status of insecticide resistance of primary and secondary malaria vectors in the Lao PDR.

Determination of the impact of environmental factors on the spatial distribution of vectors and selection of resistance
To evaluate the potential impact of environmental factors on vector dynamics and insecticide resistance selection, spatial models were created. These models were based on environmental, meteorological, and demographic factors and were used to estimate favorable conditions for presence of malaria vectors and risk of insecticide resistance in the Lao PDR. A spatial database was built using a GIS (Geographic Information System) to manage and analyze geographic information. The results show that the highest risk of exposure to Anopheles mosquitoes was concentrated in areas in the southern Lao PDR. Insecticide presence and potential selection pressure were also higher in the south of the country, indicating higher risk for insecticide resistance development. Additional results, such as monthly precipitation, monthly temperature, estimation of monthly mosquito species presence, etc. are available as supplementary material.

The results of this work can be used to strengthen public health policies with targeted and effective strategies in the prevention of malaria among populations most at risk, having malaria elimination as a final target. Results may also be used to focus detection of insecticide resistance in Anopheles mosquitoes, reducing considerably the area of surveys and allowing quick deployment of insecticide resistance management strategies if needed.

Figure 7. Vulnerability of the human population, from population density and bed-net coverage (A), exposure to Anopheles-favorable conditions (B) and exposure to potentially resistant Anopheles (C), Lao PDR

To address the lack of expertise in medical entomology in Lao PDR, the project carried out training and capacity building for students and technical officers. Insectaries, insecticide testing and molecular laboratories were established at IPL, Lao PDR and KU, Thailand. Two training sessions were held at Kasetsart University, Bangkok during the project. The first session, Biological methods for detection of insecticide resistance in malaria vectors, was held in November 2013 and consisted of lectures and practical sessions on bioassays, species identification, and mosquito rearing. The second session, Methods for molecular identification of sibling species and Plasmodium detection, was held in October 2014 and contained theoretical lectures and practical sessions on DNA extraction, PCR for sibling species identification, and Plasmodium detection. Overall, during the 3 years project, two students were trained (PhD and Master), and four researchers, one engineer, two laboratory technicians, three public health officers, many local health staff, and >200 mosquito catchers were involved in the project.

Based on the results obtained in the MALVEC project, scientific partners, participants, experts and scientists, and national and international stakeholders agreed at the MALVEC final meeting (21–22 March 2016 in Vientiane) on a set of key recommendations based on the results and outputs of the project. These recommendations are intended for national authorities in order to improve malaria control and accelerate malaria elimination in the Lao PDR These were:

The scientific results of the MALVEC project are presented in a book that will be distributed to the health authorities of the different provinces concerned and online at http://www.malvec.pasteur.la

The MALVEC project was initiated thanks to the research grant from the Initiative 5% of the Global Funds to fight Aids, Tuberculosis and Malaria and Expertise France