Risk of vector-borne diseases in relation to rubber plantations in Côte d’Ivoire as compared to Lao PDR.

Funded by the Michelin Corporate Foundation 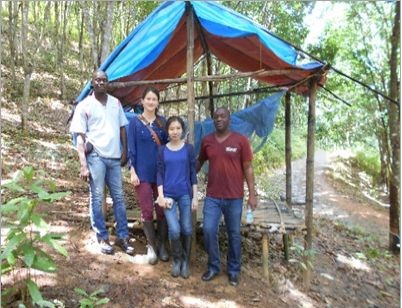 Côte d’Ivoire has the largest area of rubber plantation in the whole of Africa. We anticipate that the changes in the environment to rubber cultivation is resulting in an altered risk from vector-borne diseases for the local population with increased risk of exposure to vector mosquitoes for the rubber workers and their families; predominantly malaria and yellow fever, but also arboviral diseases such as dengue and chikungunya. This study will provide an opportunity to further develop the entomological department at Institut Pasteur de Côte d’Ivoire whilst deepening our understanding of the vector ecology in rubber plantations in West Africa. Furthermore this data will be combined with data collected in a similar fashion in Lao PDR to write a comprehensive document about the vector-borne disease risks for rubber workers. It is envisaged that this project will allow us to advise different governmental and health organizations how to decrease vector-borne disease incidence in rubber plantation areas where active transmission of vector-borne diseases already occurs. For this purpose we will also be comparing commercially available personal protection methods in the field both for their protectiveness from mosquitoes and acceptance by the local population. This study will be of relevance to public health workers, governments and those working in the rubber industries of Côte d’Ivoire, other countries in West Africa and SEA. The goal of this study is to assess the potential risk of vector-borne disease infections occurring in and around rubber plantations.

The study objectives are:

During the last year the Yersin team has spent considerable time in the field, both in Côte d’Ivoire and in Lao PDR. In Côte d’Ivoire the team has continued its successful adult mosquito data collection in the field which was started in December 2015. In Lao PDR during two months of intense fieldwork, data has been collected on the protectiveness of different personal protection methods. In the following paragraphs we will go into detail on our activities in both countries for this project.

We have summarized the data of the first eight months of collection for the important malaria, yellow fever and lymphatic filariasis vectors to give insight into the data collected. The most abundant malaria vector Anopheles gambiae s.l. was collected a total of 61 times. The malaria vector seems more prevalent in the villages than in the rubber plantations with more than half of the samples collected from the villages surrounded by rubber plantations. The vector was mostly active from 22.00 to 02.00 O’clock when villagers were asleep. Contrary to the malaria vector, the density of the yellow fever and dengue vector Aedes aegypti was highest in mature and immature rubber plantations where 95% of the total 1,402 Aedes aegypti samples were collected. The vector was active throughout the day with a peak from 16.00 to 18.00 O’clock. A total of 2,031 Culex quinquefasciatus mosquitoes have been collected during the first eight months of collection. This important vector of lymphatic filariasis was generally collected in high numbers from the villages away from the rubber plantations. Peak collection period was from 19.00 to 22.00 O’clock when villagers were preparing to go to sleep. The preliminary results presented here give a first insight into the data. The vector presence and behaviour will be analysed at the end of 2016 when data is complete.

Apart from the adult mosquito identification we are also analysing the collected vector samples for parity rate of the ovaries, which gives an indication of the survival rate of the mosquitoes. Using this survival rate we can identify the longevity of the mosquitoes, with long living vector mosquitoes resulting in more effective disease vectors. After collection of adult mosquitoes has been completed in December 2016 we will use both the adult mosquito prevalence and survival rate for calculations of the basic reproductive number (R0) which gives an indication of the number of infections one disease case can generate on average during the course of its infectious period in a certain habitat. If the basic reproduction number is for example two, this entails that one infective human case can result in two new infective human cases. The higher the basic reproductive number in a habitat, the higher the risk the disease establishes itself in the habitat.

Rapid rural appraisals have been conducted in November 2015 to assess the knowledge among villagers regarding vector-borne diseases and to extract general behavioural patterns of the villagers and rubber workers. Currently we are in the process of conducting tri-monthly surveys in the field to collect additional data on the behaviour of the local villagers and rubber workers in the different habitats throughout the year. Using the results from both the rapid rural appraisals and surveys we will identify several common behavioural patterns. The combination of the human behaviour data and entomological data will enable us to identify risky behaviour for vector-borne diseases. This information will be used to inform the government and local population on when and where villagers and rubber workers are exposed to vector-borne diseases, risky behaviour and how to mitigate these risks.

The knowledge on how to mitigate vector-borne disease risk alone is not enough to decrease vector-borne disease incidence. It is important to identify how we can communicate our recommendations to the local populations. To identify the best methods with which we can reach the local population, we will conduct several focus group discussion in the study area. We have identified social scientist students from the local university to help conduct these discussions and analyse the data. We are currently in the process of writing the standard Operating Procedure (SOP) which will be implemented in the field in 2017.

Next year we plan to collect data on the breeding sites of the important vector species identified during the adult mosquito survey. We are currently updating the SOP of the larval survey. The survey will be conducted throughout 2017 in the same habitats where adult surveys are currently taking place. The identification of the main waterbodies where mosquitoes breed, will be used to design vector control strategies and and write recommendations on how to decrease vector numbers in the area.

In July 2016 we received the approval from all ethical committees (Institut Pasteur Paris, Durham University and the Lao government) for our personal-protection methods comparison study. We started our fieldwork at the end of July 2016 in northern Lao PDR. For 8 weeks we worked in the field to collect adult mosquitoes using five treatments and two untreated controls (Table 1). Collections were conducted using human landing catches for 6 consecutive hours in villages at night and in forested areas during the day. A total of 14 comparison days and 28 comparison nights were done. A total of 32 participants were involved, whom all received a long lasting insecticide-treated net and relevant health insurances. Furthermore participants were paid for their work collecting mosquitoes. All collected mosquitoes have already been identified to species. We are now in the process of entering all data in digital files for analysis. During the next trimester focus will be on cleaning the data and analysing the results for recommendations.

Table 1: The five treatments and two controls of the comparison study 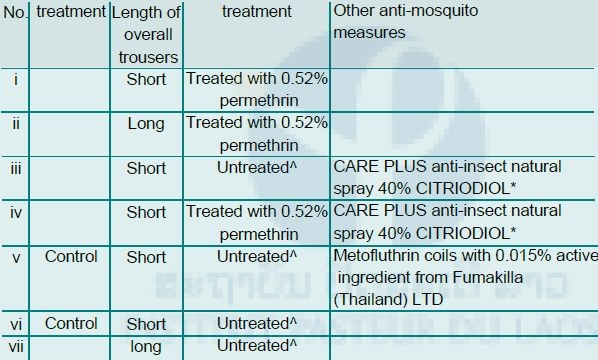 All untreated clothing has gone through the same procedure (i.e. factory dipping) but without the active ingredient for fair comparison.* was applied once to exposed skin during the six hour collection period. Repellent was applied by the responsible (i.e. Julie-Anne Tangena) at a rate of four dose (sprays) per limb to decrease variation of application among participants

In August 2016 we conducted 12 focus group discussions with the help of two social scientist students from Vientiane University. Focus group discussions were conducted with young boys (< 20 years), young girls (< 20 years), male adults (20-35 years), female adults (20-35 years), old male adults (> 35 years) and old female adults (> 35 years). In small groups the local villagers were asked to share their experience and knowledge of mosquitoes and mosquito-borne diseases. Furthermore we asked them about the current methods used by the government to communicate information to the local villagers (eg. meetings, posters, radio spots, t-shirts) and which methods they preferred. The focus group discussions are currently being transcribed and translated. Data will be analysed for trends.

A representative of the Michelin Corporate Foundation, Mister Phillipe Legrez, visited the Ivorian and Lao team in Côte d’Ivoire from the 27th to the 29th of January 2016 to discuss the project achievements so far and to see the Yersin activities in the field. The HDN trap was clarified and presented in the field. Additionally in each of the three study villages a small meeting was held with the village head, village elderly and study participants to talk about the project and its impact on the village. Furthermore the district health centre was visited to understand the impact of mosquito-borne diseases on people living in the area and how they are helped. All in all, the visit of Mr. Legrez was a great opportunity for the project team to show the progress of the project and a great opportunity to discuss the project in detail to ensure the goals and objectives of the project are met.

The research director from the Ministry of Research Côte d’Ivoire, director of the National Institute of Hygiene Côte d’Ivoire, representative of the National Center of Agricultural Research (CNRA), Ivorian entomologists and other representatives from the research field were present to witness the official opening. The research director from the Ministry of Research, the director of Institut Pasteur de Côte d’Ivoire Pr. Dosso and Mr. Legrez gave a small talk on the impact of the Yersin project. A balafong band provided music during the ceremony. After the ceremony the ribbon of the building was cut and everyone received a short tour of the building. On the whole the inauguration ceremony provided us with a great opportunity to highlight the Yersin project to the research and government community of Côte d’Ivoire.

In 2017 the focus of the Yersin project will be on both the analysis of data collected in 2016 and conducting additional field work. The data analysis will consist of entering the data, cleaning the data and using statistical analysis to investigate the data. The data will be used to write scientific papers and the conclusions from these papers will be communicated as recommendations to the local populations and health offices in the region. The field work in 2017 will mainly take place in Côte d’Ivoire with both a larval survey and social study planned for next year.