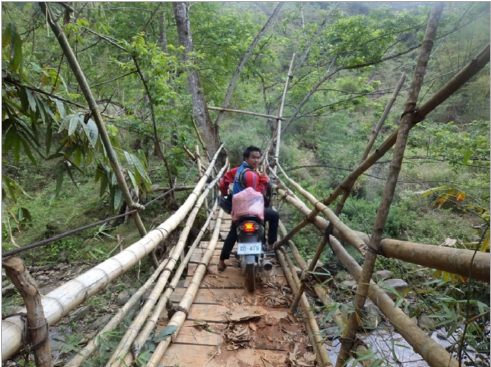 Background:
Diphtheria is a vaccine-preventable infectious disease caused by the bacterium Corynebacterium diphtheriae. The disease is spread primarily by droplets from the nose, throat and eyes and affects all ages but is more prevalent in unvaccinated individuals below the age of 15 years. Between October and mid-December 2012, the National Centre for Laboratory and Epidemiology (NCLE) reported 93 suspected cases of diphtheria, including 6 deaths, from the Xamtai and Huameuang districts, Huaphan province. Age distribution was specified for 24 suspected cases (29.2% under 4 years, 41.7% between 4 and 9 years, 20.8% between 10 and 14 years, 8.3% older than 14 years). Further outbreaks occurred in other provinces and continued in 2013 (about 29 suspected cases in Huaphan and 20 more nationwide in 2013). Such reemergence of a serious but vaccine- preventable disease could be due either to poor vaccination coverage or low effectiveness of the vaccines used.

In collaboration with the Institut de la Francophonie pour la Medecine Tropicale in Vientiane, we aimed to assess the diphtheria immunization status of children in two districts of the province of Huaphan and to determine the reasons for non-vaccination and lack of seroconversion among vaccinated children.

Following parental informed consent, 132 blood samples were taken from children between the ages of 12 to 59 months in Kuan and Xamtai districts of Huaphan province. Factors associated with non-vaccination are shown in Table 2. Antibodies to Diphtheria toxin were detected in 84 children (63.6%) of which 58 (43.9%) had a titer greater than 1 international unit per milliliter (IU/ml) corresponding to a long-term protection. Children from villages within 100 minutes of a health center were significantly better immunized against diphtheria (p < 0.001) than the children of more remote villages. Tetanus antibodies were also higher in those villages closer to health centres (Figure 2). We also found a high percentage (65%) of the children had no protective antibodies against hepatitis B virus and 49% were infected with intestinal parasites. These data indicate very low vaccine coverage and high intestinal parasite infections in Huaphan province, particularly in rural areas far from health centres. The occurrence of a diphtheria epidemic in the Huaphan Province clearly reveals a serious deficiency in immunization coverage of children under 5 years of age. Whether significant proportions of children targeted by the EPI are not reached by mobile teams or the vaccines are poorly preserved and used, or that the immunogenicity may have been low, remains to be determined more precisely but the first two factors appear to be associated predominantly.

This study supports the findings of previous surveys conducted in Lao PDR leading to the following recommendations: strengthening health education for target populations, prioritization of vaccination in the national health strategies, reinforcement of mobile teams in remote areas, improving coordination with village leaders to reach all target children, strengthening of equipment of all health centers (fridges, kerosene and/or gas), ensuring regular supply of vaccines, cold chain management and adoption of temperature-monitoring technologies during storage and transport of vaccines. With regard to ethnic minorities, an anthropological approach should be implemented to take into account any cultural barriers to vaccination. The implementation of these recommendations should be a priority in the most remote provinces in order to avoid the recurrence of outbreaks of deadly but vaccine preventable diseases in children.

Prospective
These data were presented in poster format at the National Health Research Forum, Vientiane, October 2013 and have been reported to the Lao MOH. 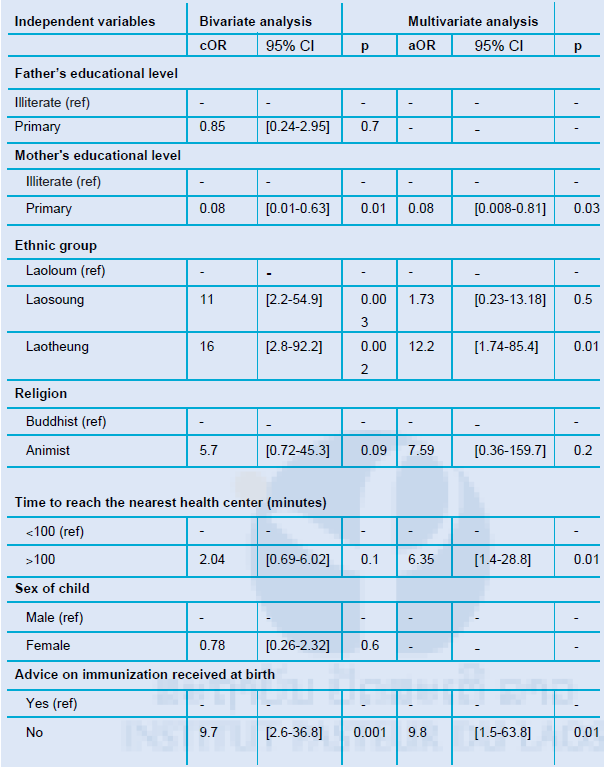 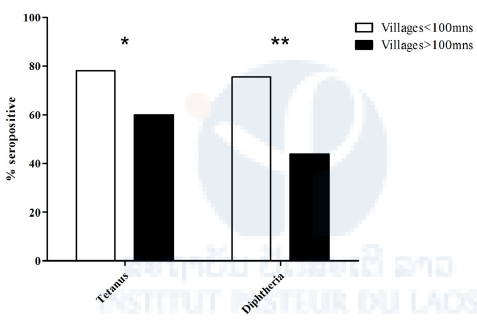