Description of the project and objectives:

Background:
Chikungunya virus (CHIKV; Togaviridae, genus alphavirus) has been recognized as a cause of epidemics in Southeast Asia since the end of the 1950’s. Although CHIKV has been demonstrated in most countries of the Indochinese peninsula (Thailand; Viet Nam; Cambodia), no relevant data were available for Lao PDR until 2012.

Objectives:
To document the transmission cycles of Chikungunya virus and improve the epidemiologic follow up of the current Chikungunya epidemic in Laos.

Methods:
Seroprevalence studies are held in different provinces of Lao PDR in order to find arguments of human exposure to Chikungunya virus or related viruses. Active surveillance in these areas is also maintained for maximizing the probability of viral isolation.
Mosquito trapping campaigns are organized in the studied area to increase knowledge on viral vector species.
Molecular screening of human and mosquito samples is performed by mean of real time RT-PCR specific for Chikungunya virus, but also by conventional large spectrum RT-PCR within the alphavirus genus. Sequencing for genetic studies of Chikungunya strains and viral identification are performed in collaboration with the platform for Genotyping of Pathogens and Public Health (PF8, Institut Pasteur, Paris).

Results:
Pairs of sera collected in 2007 and 2010 in the resettled population of the implantation site of the Nam Theum 2 hydroelectric power dam were analysed for the presence of antibodies reacting against chikugunya virus antigen. In certain villages, up to 35% of the participants were found positive for anti-chikungunya IgG. Interestingly, seroconversions were evidenced confirming the continuous exposure of the population. Neutralization tests confirmed that the detected antibodies specifically reacted against different viruses belonging to Semliki Forest virus antigenic complex. However this test was insufficiently discriminative to formally conclude on the presence of Chikungunya virus in this area. More than fifty different species of mosquitoes representing more than 7600 specimens have been collected during entomologic investigations in villages and in remote forested areas.  Among these samples, 31 distributed in 15 different species were found positive for the presence of flavivirus or alphavirus sequences. Identification of the viral species is now ongoing by sequence analysis and viral isolation assays.
In July 2012, epidemic foci of dengue-like syndromes were recorded in two districts of Champasak Province, Southern Laos. Dengue diagnostic investigations were negative thus the National Centre for Laboratory and Epidemiology (NCLE) reoriented the analysis on Chikungunya confirming 16 cases by RT-PCR over the 52 suspected cases tested. All samples were sent to the Institut Pasteur du Laos for serological testing and to attempt viral isolation. These complementary analyses allowed detecting anti-chikungunya antibodies in 22 new patients and to obtain 14 viral strains. Viral genotyping evidenced a strong link between the Lao strain and the Chikungunya ECSA genotype strains that circulated in Cambodia in 2010-2011. The virus was also  detected in and  sequenced from Aedes aegypti specimens captured during the outbreak. A seroprevalence study is ongoing to determine the degree of immunity in the two districts. During the collection period, acute cases were confirmed. A specific active surveillance system has been organized by our laboratory to survey the progression of the virus in Laos and provide weekly updated information to the Lao Ministry of Health. 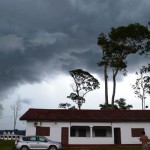 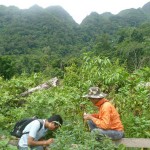 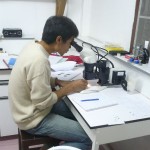 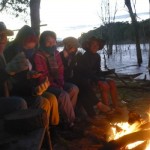