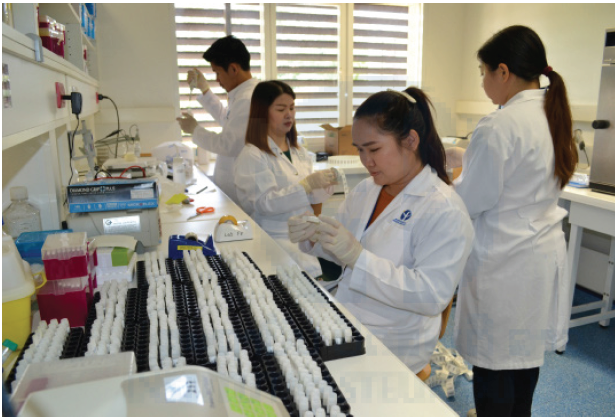 For now eight consecutive years, the AVED laboratory provides real-time information on dengue transmission to the Lao Ministry thanks to its surveillance network in Vientiane Capital. Since 2015, the surveillance network includes several Lao provinces after specific a request of the MOH (Saravan; Attapeu) and as an outcome of a large training program for the Lao Army health service (Arboshield project; Champassack; Luang Prabang….). The sum of the data allows establishing, with a certain degree of certainty, predictions regarding the level of transmission of dengue in Vientiane Capital city (Table 1). In November 2018, the indicators suggested that, if environmental conditions were met, a major dengue epidemic could be expected in Laos. This trend was confirmed in the first months of 2019, when a significant level of dengue cases was confirmed with a predominance of serotype 2 (Figure n°3). 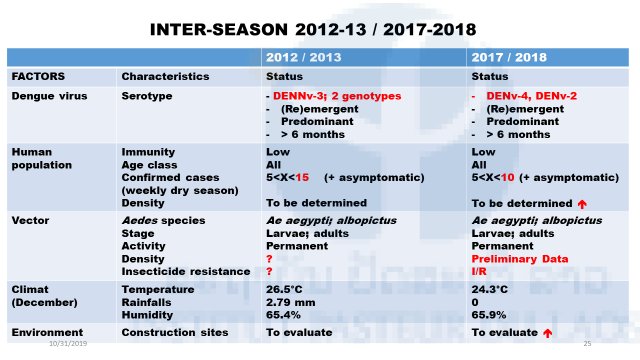 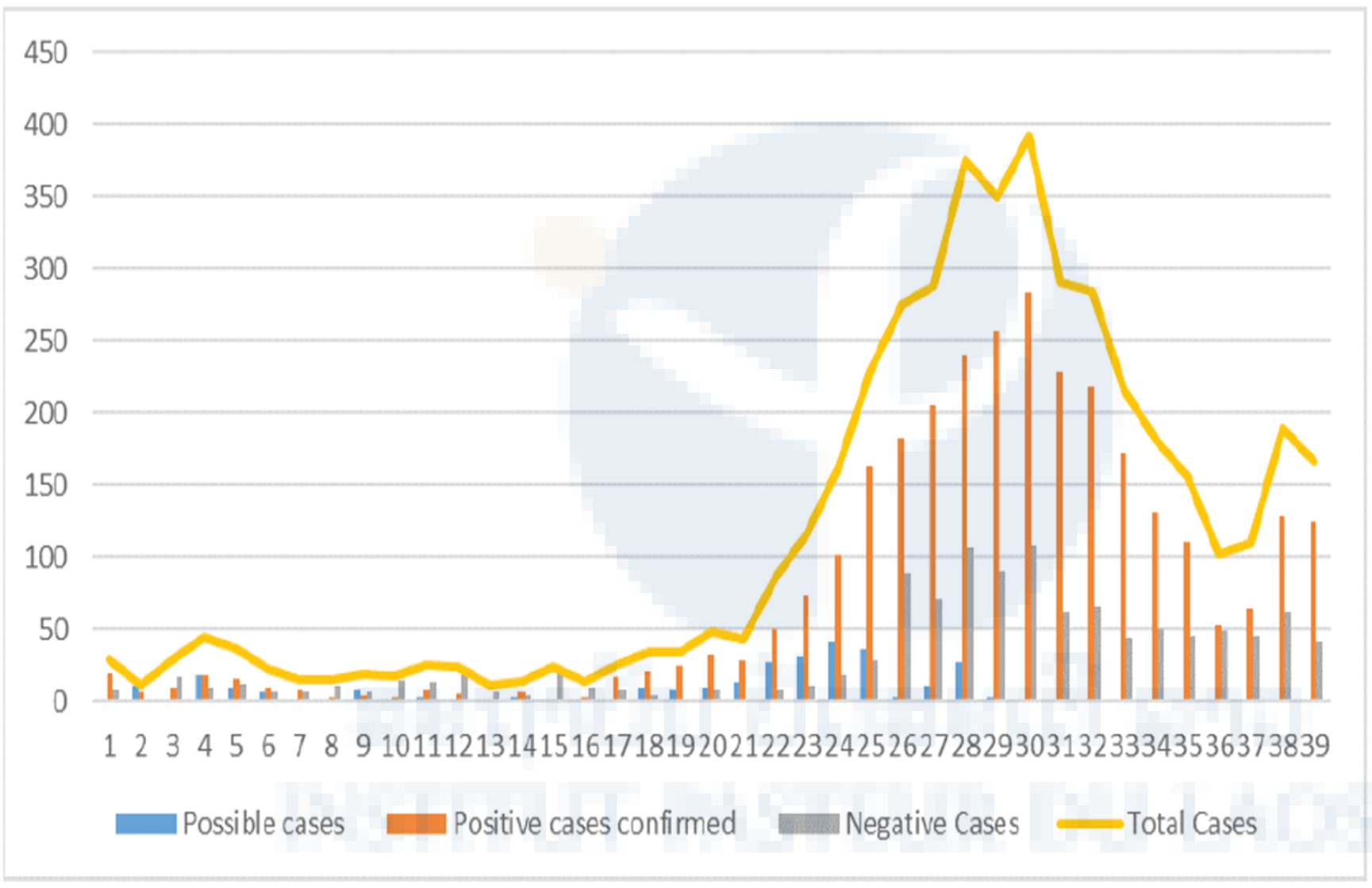 As of September 30, 2019, 33.200 cases of dengue were reported at the national level, including 66 fatal cases attributed to dengue. Of them, 21 were recorded in Vientiane Capital city. investigated. A dengue virus infection could be confirmed for 11 of the 13 cases investigated by the AEVD laboratory. All three circulating serotypes (i.e. DENV-1; DENV-2 and DENV- 4) were found at the origin of these fatal cases. AEVD laboratory investigated a large part of the suspected cases. From January to September 2019, 6211 dengue suspected cases from 9 provinces (Vientiane Capital, Vientiane Province, Saravan, Attapeu LuangPrabang, Xayabouly, Xieng Khouang, Champassack and Savannakhet) were tested giving a global confirmation rate of 65%. At the acme of the outbreak, between weeks 27 to 33, the confirmation rate reached 80%. At this stage, the number of samples received by the laboratory was not manageable anymore (Picture 1). Specific clinical criteria were determined and discussed with the Ministry of Health and WHO in order to save laboratory capabilities and prioritize the investigation of critical cases. The number of samples tested for dengue virus serotyping has also been reduced. The drop in the number of cases observed in the surveillance in Vientiane Capital is mostly a result of the recommendations for a prescreening selection of the suspected cases (Figure n°3). As shown by the syndromic surveillance system, the number of cases recorded began to decrease from week 34. However, the confirmation rate remained beyond 70%, suggesting the epidemic may continue until the end of the year. Among the RT-PCR positive cases, 10 to 30% were randomly selected for serotyping. This procedure, experienced during the 2012-2013 DENV-3 epidemic, demonstrated to give an accurate vision of the distribution of the dengue virus serotypes. The predominance of DENV-2, anticipated in October 2018, was confirmed and was associated with a cocirculation of DENV-1 and DENV-4 (Figure n°4). 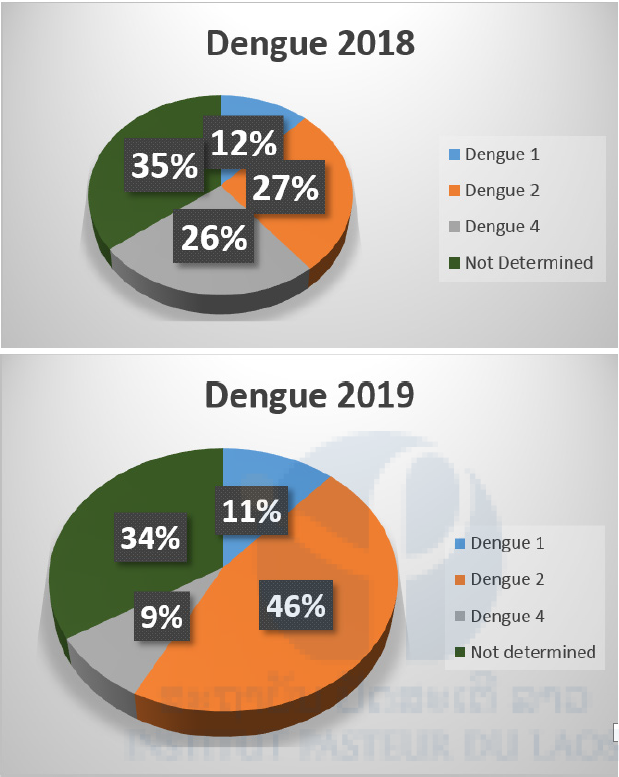 The algorithm used for the investigation of dengue suspected cases includes a differential diagnosis approach. At this stage, chikungunya and zika viruses have been identified as possible threats with potentially high impact in the general Lao population. As diagnostic capacities and capabilities remain limited, the passive surveillance of these viruses is the keystone for the early detection of the importation and/or circulation in the country. Urine collection has been promoted to the clinicians, for now, four years to improve zika virus direct diagnosis by RT-PCR. When available, the suspected cases negative for dengue were tested for the presence of zika virus genome in urine by RT-PCR. No case of zika infection could be identified in 2018-2019.

Two cases of chikungunya virus infection were recorded in foreigners returning respectively from Indonesia and Myanmar. Genetic and vector competence on Lao populations of Aedes mosquitoes are now under investigation.