SATREPS Project: Project for Development of Innovative Research Techniques in the Genetic Epidemiology of Malaria and Other Parasitic Diseases in the Lao PDR for Containment of Their Expanding Endemicity 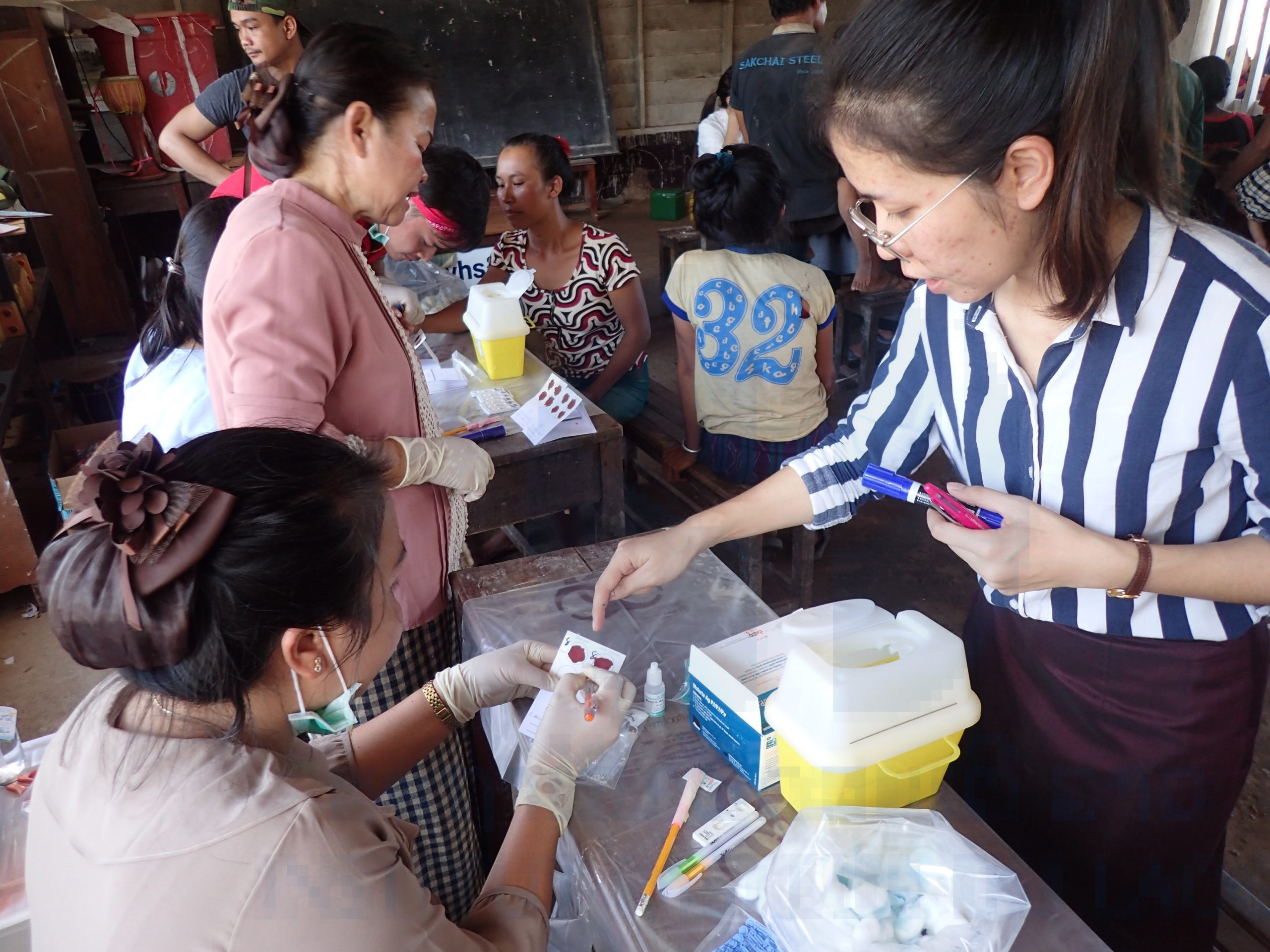 Malaria, Schistosomiasis (Schistosoma mekongi), and Opisthorchiasis (Opisthorchis viverrini) are a tremendous health burden on the people of the Lao PDR. Although significant reductions in malaria transmission have been reported due to the large-scale distribution of insecticide-treated bed nets (ITNs) through the Global Fund to Fight AIDS, Tuberculosis and Malaria, strategies based on the scientific evidence have not been developed to deal with the genetic variations in parasite and vector populations and drug-resistant malaria. Recently, artemisinin-resistant malaria was reported in southern provinces [1, 2]. Therefore, it is necessary to survey other provinces, especially the five southern provinces of the country, to monitor and contain the spread of drug-resistant malaria. The Lao Ministry of Health and the WHO has set a goal of eliminating malaria by 2030. To achieve this goal, we have to understand the real malaria situation, including drug-resistant malaria, the prevalence of glucose-6-phosphate dehydrogenase (G6PD) deficiency, the prevalence of asymptomatic Plasmodium carriers, malaria situation among mobile and migrant populations, and develop effective elimination strategies.

Significant progress has been made in the past decades in the reduction of the prevalence of Schistosomiasis (S. mekongi) in the endemic areas (approximately 200 villages) in Khong district and Mounlapamok district, Champasak province, Lao PDR, through preventive chemotherapy using praziquantel as the drug of choice once a year as well as health education in the community. However, current monitoring methods rely on the Kato- Katz stool examination whose sensitivity may not be sufficient to detect light intensity S. mekongi infections. In 2017, WHO adopted a new strategy that accelerates the elimination of Asian schistosomiasis in the Western Pacific Region, i.e., transmission interruption by 2025 and eradication by 2030.

One criteria of transmission interruption are “no new case of animal infection.” To achieve this goal, we need sensitive detection methods, such as DNA diagnostic methods (PCR and LAMP) and serological methods (ELISA), to monitor the prevalence of the disease precisely in the endemic areas.

The government of the Lao PDR requested the Japan International Cooperation Agency (JICA) to establish the Lao–Japan Joint Laboratory within Institut Pasteur du Laos (IPL) to conduct highly technological research on malaria parasites (Plasmodium falciparum, P. vivax, and the monkey malaria parasite P. knowlesi) and human trematodiases (S. mekongi and O. viverrini). The joint research will concentrate on genetic epidemiological studies to detect and control the emergence and dissemination of these parasitic diseases. The project also contributes to the capacity development of researchers and technicians in the Lao PDR through training in field and lab work, seminars, and career development.

In order to carry out this project, the IPL in collaborating with the National Center for Global Health and Medicine (NCGM), Tokyo, Japan, Tokyo Medical and Dental University (TMDU), University of the Rukyus, Okinawa, Japan, the Center of Malariology, Parasitology and Entomology (CMPE), the Lao Tropical and Public Health Institute (Lao TPHI), and other Departments of the Ministry of Health, Lao PDR.

The objectives of this project are (1) to develop more convenient and accurate methods (PCR methods, LAMP methods, etc.) for diagnosis of the diseases, (2) to monitor the temporal and spatial epidemiological situations of pathogens and vectors of the diseases, (3) to analyze mechanisms of emergence and expansion of drug-resistant malaria, especially artemisinin resistance, and (4) to analyze the G6PD activity of the Lao population for evaluation of the possible usage of primaquine [3, 4], utilizing molecular biological techniques. Based on the scientific evidence obtained by this project, health education for the people will be strengthened and the endemicity of the diseases will be monitored together with the local Lao Ministry of Health officials. Research results will also be utilized in government services for the sustainable development of the Lao PDR.

The SATREPS project was approved by the National Ethic Committee for Health Research, the Ministry of Health, Lao PDR from 2014 to present (extended each year).

Prevalence and distribution of artemisinin-resistant P. falciparum in Lao PDR

Artemisinin-based combination therapies (ACTs) have been used as a first-line treatment for uncomplicated malaria in Lao PDR since 2005. However, artemisinin-resistant P. falciparum was first reported in 2013 and is indeed threatening malaria elimination by 2030. It is reported that mutations of the K13 gene in P. falciparum are associated with artemisinin resistance and can be used as a molecular marker for monitoring artemisinin-resistant P. falciparum. The aim of the study is to assess the prevalence and distribution of the K13 mutations in Lao PDR.

Real-time nested PCR was performed to identify Plasmodium species using malaria positive samples (Table 2). The proportion of Plasmodium species was heterogeneous by province or by year. For example, in Savannakhet, P. falciparum was predominant species while in Sekong, P. vivax was predominant species. Direct DNA sequencing was performed to detect the K13 mutations in isolates of P. falciparum (Table 3). Data on the K13 mutations of P. falciparum in the five southern provinces from October 2015 to April 2016 and the northernmost province in 2017 was published in Malaria Journal (Iwagami et al., 2018). Recently, the K13 mutation analysis of P. falciparum collected in the five southern provinces from November 2016 to May (or June) 2017 has just finished. Most of the mutations were C580Y mutation. Surprisingly, the prevalence of artemisinin-resistant mutation decreased from 2015 to 2017, except for Champasak.

The blood samples are now being analyzed by nested real-time PCR for the identification of Plasmodium species. Mutation(s) of the artemisinin-resistant gene (the K13 gene) is also being examined using P. falciparum positive samples at IPL and NCGM.

Training course on basic and molecular parasitology at the National Center for Global Health Medicine and (NCGM), Tokyo, Japan

Completed PhD course on public health at University of the Ryukyus

On 2nd April 2019, JICA/AMED SATREPS Project Final Dissemination Meeting was held at the Lao Plaza Hotel. Dr. Shigeyuki KANO, chief advisor of the SATREPS project and Dr. Rattanaxay PHETSOUVANH, Director General of Department of Communicable Disease Control (DCDC), Ministry of Health were cochaired the meeting. Dr. Bouasy HONGVANTHONG, Project Director of the SATREPS, Former Director of Center of Malariology, Parasitology, and Entomology (CMPE), Ministry of Health, Dr. Viengxay VANISAVETH, Acting Director of CMPE, Dr. Paul BREY, Project Manager of the SATREPS, Director of IPL, and other members of the SATREPS project both Japan and Laos participated in the meeting. Staff members from the Provincial Health Department, WHO Laos Office, JICA Laos Office and Japan Embassy were also attended. Project members of the Parasitology lab presented seven presentations about outcomes of the five-years project including malaria, schistosomiasis and opisthorchiasis. Finally, Dr. Rattanaxay summarized the outcomes of the SATREPS project.

A handover ceremony of Eiken LAMP machine was also held at the end of the meeting. Eiken Chemical, Co. Ltd, Japan donated five LAMP machines for Lao PDR to accelerate malaria elimination by 2030. The five LAMP machines will be installed in health care facilities (District Hospitals) in malaria high endemic districts in the five southern provinces.

We wish to thank Dr. Bouasy HONGVANTHONG, Former Director of the Center of Malariology, Parasitology and Entomology (CMPE), the Ministry of Health, Lao PDR, and Project Director of SATREPS for his kind support of this project. We thank Dr. Tiengkham PONGVONGSA, Deputy Director, Savannakhet Provincial Health Department, Lao PDR. We also thank the staff of the CMPE, the Lao TPHI, Provincial Health Departments, Provincial Hospitals, District Hospitals, and Health Centers, the Ministry of Health, for supporting our field surveys and training courses.

This work is financially supported by the SATREPS (Science and Technology Research Partnership for Sustainable Development) project from the Japan International Cooperation Agency (JICA) and the Japan Agency for Medical Research and Development (AMED).