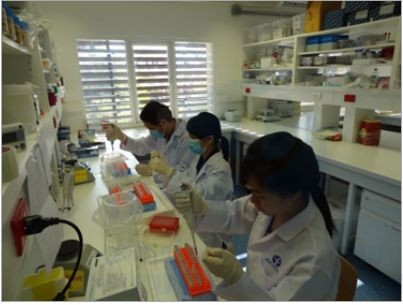 Respiratory tract infections are one of the most common reasons for seeking medical care  [16] and can be caused by bacteria and viruses. Rhinovirus, coronavirus, influenza virus, parainfluenzavirus, respiratory syncytial virus and adenovirus are considered to be major viral pathogens involved in respiratory diseases. In addition, a complex bacterial community can be found in respiratory samples from patients with respiratory symptoms [17]. However, bacteria and viruses can also be found in children in absence of respiratory symptoms. This complicates identification of causality in microbiota–disease associations as the total microbiota composition may determine whether a certain microbiota is clinically significant or not [18].

Empirical antibiotic treatment of respiratory infections without a laboratory confirmation of the causative microbiota may disrupt the natural bacterial community balance in the respiratory tract with severe consequences. In fact, resident non-pathogenic bacteria of the airways augment the immunity against viral infections [19] [20].

In Lao PDR, a high diversity of bacterial and viral respiratory pathogens are circulating among the population [21]. Thus a comprehensive molecular surveillance and diagnosis of respiratory infections is crucial for designing optimal medical policies. Previous studies in Lao PDR were confined to a limited number of known pathogens with almost a half of all patients left without an etiological diagnosis [22] [23]. Whereas mixed aged cohorts were addressed by investigators in Lao PDR in the past, emergence of long-term pathological sequelae and expectedly higher pathogen loads in children made us prioritize a systematic investigation of childhood infections [24].

This study aims at investigating the incidence, aetiology, and the severity of respiratory infections in children who present to the Children Hospital in Vientiane.

The study was approved by Lao National Ethics Committee and samples were collected after informed consent was obtained. Five hundred five children aged less or equal to 5 years, who presented to the Children Hospital in Vientiane with symptoms of respiratory infection, were recruited from September 2014 to August 2015. Medical personal of the hospital collected throat swabs and nasopharyngeal aspirates and tested for pathogens by rapid test and PCR.

In general, respiratory pathogens were more efficiently and sensitively detected using PCR approach. Multiplex PCR failed to detect strains of pandemic H1N1 influenza. Thus, rapid antigen tests should only be used for first guidance in the choice of adapted therapy and should be followed by diagnostics using different PCRs. Moreover, we could show that only few patients were affected by bacteria that are typically involved in the pathogenicity of respiratory symptoms. Systematic application of antibiotics is thus contraindicated for the management of patients with light respiratory symptoms and in absence of fever. Antibiotics should only be used if bacteria are identified as probable cause of the symptoms or if children are presented with severe symptoms (severe respiratory symptoms, fever, and evidence of severe illness progression). In case of severe acute respiratory infections, empiric antibiotics should be provided as soon as possible and empiric therapy should be adjusted on the basis of laboratory testing results and supported by evidenced-based supportive care for respiratory insufficiency and organ dysfunction. Moreover, transfer to the ICU area of the hospital should be considered.

Early application of antiviral treatment, for example with oseltamivir or zanamivir, is recommended when influenza A infection is confirmed or when severe influenza-like illness is observed.

Many children with respiratory symptoms were infected with several potentially pathogenic microbiota. In case of pathogen co-infection, the physician should evaluate whether both pathogens are of importance for the disease or whether only one may be the major pathogen. The therapy should be adapted accordingly.

In general, supportive therapy remains the mainstay of treatment for patients with respiratory symptoms. Most cases of light influenza-like illness resolve without antiviral treatment if appropriate supportive care is provided.

When patients are hospitalized precautions should be taken to prevent transmission of the pathogens via the air. Hospitalization rooms should be adequately ventilated and the use of respiratory (i.e. covering the mouth and nose during coughing or sneezing with a medical mask, cloth mask, tissue, sleeve or flexed elbow) and hand hygiene should be encouraged. Vaccination against seasonal influenza strains may be a good approach to prevent respiratory symptoms in children. The vaccination should occur before the end of the dry season to protect children when influenza outbreaks are most likely to occur (i.e. during rainy season). Altogether these data provide a detailed characterization of the dynamics of respiratory pathogens in the study population. This information will be useful for local medical practitioners and may assist in planning vaccination campaigns in Lao PDR.