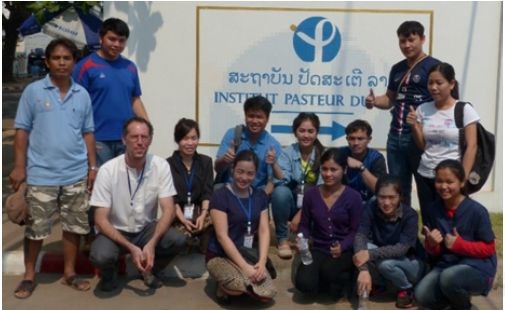 Close cohabitation between wildlife, livestock and humans facilitates zoonotic transmission of pathogens in many developing countries. In rural Lao PDR, the population mainly consists of subsistence farmers and backyard rearing of different animal species together increases considerably the risk for cross-species transmission of pathogens (e.g influenza viruses).       For instance,  pigs   are  susceptible to influenza A viruses from different hosts  (e.g. humans and birds) and are considered to be mixing vessels for influenza A viruses [25]. Co-infection with different influenza A viruses can result in reassortant viruses with pandemic potential if transmitted to the human population. The prime example is the 2009 pandemic H1N1 where reassortment events in swine resulted in a new subtype of Influenza A [26]. Pigs are also the main reservoir of Hepatitis-E viruses (HEV) and the risk for zoonotic transmission of HEV is highest for people with direct contact to pigs or for people who consume raw pork meat, as well as in regions with insufficient hygiene practices and poor sanitation [27] [28].

Contrary to the rest of the Lao PDR where small-scale pig-raising systems largely prevail [29], pig production in Vientiane capital is dominated by commercial scale piggeries. It is known that several zoonotic viruses circulate among pigs in Lao PDR [30] [31] [32], however across the country pig-disease occurrence is probably under-reported due to the insufficient capacity to implement national disease monitoring and control programs.

In addition, avian viruses are of particular interest, as many vulnerable subsistence farmers depend on successful poultry production. In poultry, infections with Newcastle disease virus, Infectious Bronchitis virus and Chicken Anemia virus can result in a decreased egg production, body mass loss, reduced growth rate and even in death. Thus endemic circulation of these viruses can have dramatic economic consequences.

In order to combat emerging infectious disease and animal disease outbreaks in remote and rural regions of developing countries, disease surveillance is essential. Our studies aim at providing baseline data on disease circulation among animal and human populations in Lao PDR. In addition, by involving the collaboration partners in the sample collection and sample analyses, we contribute to building the capacity for disease surveillance in the region.  The results of the studies are regularly reported to the collaboration partners and to the affected population to raise the awareness on infectious diseases and on possible prevention measures.

In the study region, only low prevalence of potential zoonotic viruses could be detected. No animal was found to shed Influenza A viruses, Coronavirus or Paramyxovirus. However, the finding that anti-Influenza-A antibodies were detected in 1.9 % of the poultry and in 47 % of the slaughter pigs highlights that influenza A viruses do circulate and that the rural population, as well as slaughterhouse workers, may be exposed to animal influenza viruses. As wild birds have been repeatedly identified as carrier of various pathogens, including Influenza A [33], contact of domestic poultry to wild birds should be avoided to prevent disease transmission between wild and domestic birds. Furthermore, it was shown in another study that co-rearing of poultry and pigs facilitates cross-species transmission of Influenza A viruses and emergence of reassortant viruses [34]. Thus, one could propose to the local farmers to rear only a single species to obviate direct contact between different animal species. In the current study mainly asymptomatic birds and pigs were sampled. Although asymptomatic shedding of influenza A has been described [35], it would be interesting to launch a longitudinal surveillance study targeting diseased animals to increase the chance to detect virus shedding.

We could show that 6.4 % of the domestic ruminants had anti-HEV antibodies. Moreover, 1.8% of the slaughter pigs shed HEV and a seroprevalence of 45.5% was determined. This finding is remarkable as it has been hypothesized that, although pigs are the main reservoir of Hepatitis-E viruses, other animal species may play a role as secondary reservoir and may contribute to the contamination of the environment [36]. Besides direct transmission between domestic animals and humans, water-borne infections may be common in the study region. In fact, we could observe that unsafe water is frequently consumed and used for the preparation of dishes. Moreover, domestic animals mainly roam freely through the villages and have access to open water surfaces which they may contaminate. We will investigate the risk for the local population in our next study entitled “Risk factors of zoonotic transmission in rural villages of Vientiane province”.

Interestingly, less than 1% of the poultry were found to shed Newcastle Disease virus, although this virus is the biggest poultry problem worldwide in the absence of influenza A. Due to the very low prevalence of the virus in the study regions, one could think of three strategies: i) Seroprevalence study for NDV to identify also previous infections (ongoing) ii) Systematic and regular vaccination of all the poultry to avoid future disease outbreaks; iii) quarantine of newly bought animals for observation and for at least 2 weeks. As farmers are generally reluctant to vaccinate their animals due to the  attributable costs and inconveniences (e.g. side effects of vaccination), one could raise their attention to the risk of “disease import”. Indeed, animals bought in other parts of the country may be carrier of pathogens that currently do not circulate in the region. This is also true in light of other avian pathogens such as influenza A subtypes that are circulating in other provinces of Lao PDR [37]. To avoid disease outbreaks, one could place these animals under quarantine. Quarantined animals should not have any direct or indirect contact to other animals. To interrupt the infection cycle, a quarantine zone should also be implemented for diseased animals infected with e.g. Infectious Bronchitis virus or Chicken Anemia virus. In the study region, 23 % of the poultry were found to shed Infectious Bronchitis virus and 14.6% Chicken Anemia virus.  Endemic infections with these viruses probably results in continuous production losses with dramatic economic consequences for subsistence farmers. 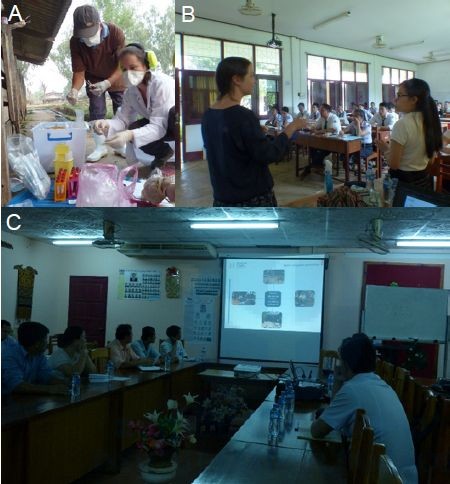 Figure 2: Pictures of A) A sample collection, B) A lecture given to the students of the Faculty of Agriculture, C) An Information meeting for the village chiefs