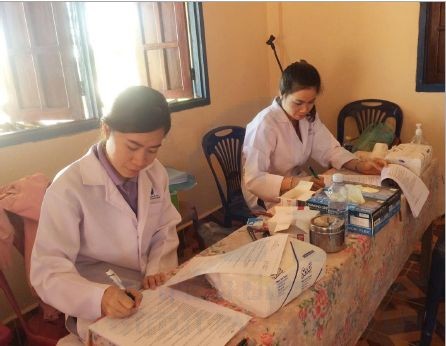 The incidence of vaccine-preventable diseases is high in Lao PDR. For example, between 8 – 10% of the adult population have chronic hepatitis B virus (HBV) infection and recent diphtheria, measles and polio outbreaks have been reported [1].
The pentavalent DTPw–HepB–Hib vaccine is scheduled at 6, 10 and 14 weeks of age, but the percentage of infants receiving the third dose of vaccine is variable. Continuing outbreaks of vaccine-preventable diseases are thought to be largely due to low vaccine coverage.

In addition, some immunised individuals may have reduced responses to vaccines because of immune deficiencies, nutritional status, parasite infestation, thermal lability of vaccines, a break in the cold chain and/or inappropriate freezing. Indeed, we have recently shown that there may be deficiencies in the immune response to diphtheria vaccine in Lao PDR [2].

In this study, we assessed immunity after vaccination with the pentavalent DTPw–HepB–Hib vaccine by measuring antibodies against diphtheria, tetanus and HBV in children. We also determined factors that were associated with poor response to vaccination.

Children aged between 9 and 50 months and their mothers were recruited from Khammouane, Boulhikhamxay and Vientiane provinces within Lao PDR. All children had vaccination records indicating 3 doses of pentavalent vaccine (Figure 1).

Figure 1. Study location. In 2011-12, about two thirds of children received 3 doses of DTPHepB-Hib in the three participating provinces of Vientiane, Khammouane and Boulhikhamxay (68.7%, 66.6% and 65.6% [3]). Participants were selected from 40 villages from Kasee, Feung and Keooudom districts in Vientiane province; 22 villages from Paksan, Bolhikhan and Vienthong districts in Bolikhamxay province and 27 villages from Thakhek, Boualapha, Hinboon and Nakai districts in Khammouane province. 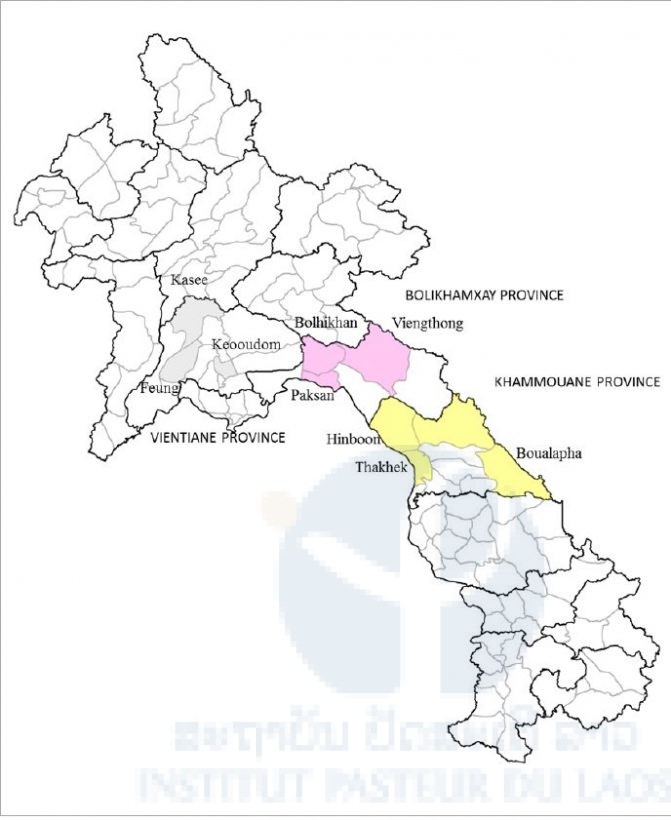 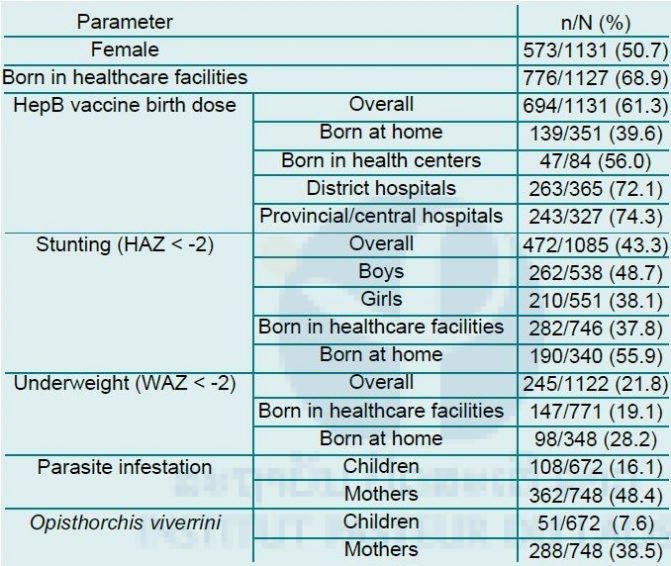 Figure 2. Serological profile of participating mother and children. Protective anti-HBs antibody titres were defined as being >10mIU/ml and protective anti-diphtheria and anti-tetanus antibodies as >0.1IU/ml. 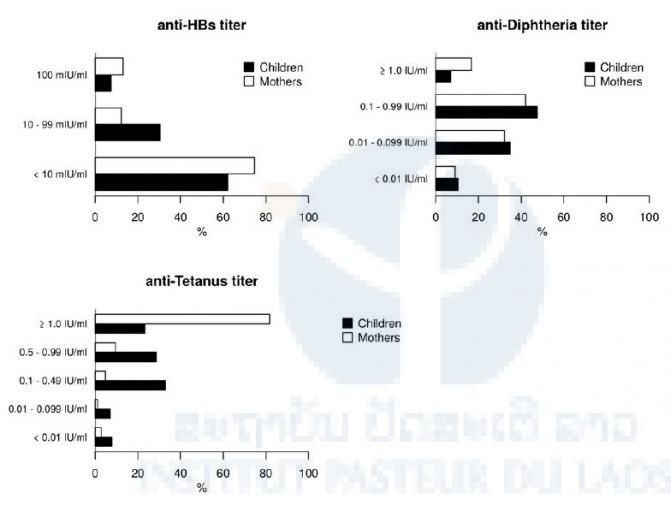 This study shows low anti-HBs and anti-diphtheria seroprotection rates in Lao children despite documented complete vaccination with a DTPw-HepB-Hib vaccine (Quinvaxem, Berna/Crucell) recommended at 6, 10, and 14 weeks of age.

Following full vaccination, protection against tetanus, diphtheria and HBV has been shown in other studies to normally exceed 90%. Median anti-tetanus and anti-diphtheria levels should also be 2-4 times higher than observed in the present study [4, 5].

The reduction in early household HBV transmission and chronic infection in children is largely attributed to the effect of hepatitis vaccine given at birth [6]. HepB BD is recommended for all neonates in Lao PDR and was given to 61.4% of participants in our study.  Similar to a previous report [7], we find that 74.4% of Lao children born in provincial hospitals receive their HepB BD in contrast to only about 40% of those born at home. This is of concern, given that the majority of births in Lao PDR are home-births (62% in 2010 [8]).  None-the-less, we did observe a low prevalence of chronic infection in the children in our study, despite high prevalence in the mothers.

What were reasons for the low level of seroprotection?

Waning of seroprotection against diphtheria and in particular against hepatitis B was faster than in other cohorts [9]. But this cannot explain the low seroprotection within the first 12 or 24 months after vaccination.

Stunting and wasting were highly prevalent in our cohort because of food insecurity in remote regions [10]. Like in some studies but not in others malnutrition was weakly associated with reduced seroprotection against diphtheria, and was mainly seen in children born at home, indicative of a reduced access to health care. Significantly fewer children who were born at home and were malnourished were protected against diphtheria. Nevertheless, even among those born in healthcare facilities with adequate nutrition seroprotection against diphtheria and tetanus were clearly below expected levels.

In general, genetic factors are believed to cause hepatitis B vaccine failure in 5-10% of individuals but certainly not in more than half of the vaccinees [11]. Also, there are no genetic factors known that cause significant variability in response to diphtheria and tetanus toxoid.

We observed preliminary evidence of geographic differences in seroprotection rates. This could be indicative of local/regional differences in vaccine management. Studies in South-East Asia showed that freezing is not rare during transportation [12]. The hepatitis B component is much more sensitive to freezing and thawing than the tetanus and diphtheria components [13]. This could explain disparities in serological response to the different vaccine antigens. It is also possible that suboptimal timing of vaccination has a detrimental impact on immunogenicity.

The HBV seroprotection rates and titres in our study are comparable to those that would be expected after a single vaccine dose. It is possible that a sizeable number of children may not have received all documented doses of the vaccine. Unreliable medical documentation in Lao PDR has been reported before [14]. Other limitations of this study include lack of information on the place of vaccination and the fact that all parameters were measured up to 35 months after the vaccination event.

In summary, we found dramatically low and disparate serological responses to the different components of the pentavalent DTPw–HepB–Hib vaccine in Lao PDR.  Even children with a confirmed response to tetanus and/or diphtheria had low responses to hepatitis B. The low responses could only be partially explained by rapid waning of antibodies, home birth and malnutrition. Local differences in response suggested disparities in vaccine management and perhaps documentation, both of which need strengthening. Thus besides low vaccination coverage, (especially also for HepB BD), the vaccine response is another major concern in Lao PDR. Our study demonstrates the urgent need to monitor the serological response to multivalent vaccines, in particular in resource-poor settings, and to carefully investigate reasons for vaccine failure.

The study was approved by the Lao National Ethics Committee (NECHR860). A manuscript has been accepted for publication [15] 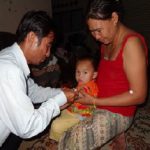 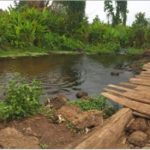