Ticks and tick-borne diseases in Laos

Background
Ticks are important hematophagous ectoparasites, which play an important role as pests and vectors of a wide range of viral, bacterial and protozoan diseases of humans, livestock, pets, and wild animals. Ticks not only play a role as disease vectors, but also cause direct impact on their hosts, such as blood loss and tick-induced paralysis (Pfaffle et al. 2009, Patil et al. 2012) and cause significant economic losses as a constraint to animal production (Jongejan and Uilenberg 2004).

In Southeast Asia, taxonomically accurate knowledge of tick species and the risk distribution of tick-borne diseases are very poorly characterized. About 104 species of ticks from 12 genera have been known in Southeast Asia, and the most species-rich genus is Haemaphysalis, with about 52 species or 30% of the world fauna (Petney et al. 2007). The relationship between ticks and tick-borne pathogens in this region is largely unknown, even though the presence of these pathogens has been recognized for many years and the number of new pathogens discovered in ticks has increased markedly (Yu et al. 2011).

(WMPA area) located in Nakai district, Khammoune province, covering a total area of 423 000 hectares. This area is considered as a biodiversity hotspot in SE Asia About 6,900 people live in NNT clustered in 31 villages; a density of about 1.95 persons/km2. Villagers in the area mainly rely on a number of forestry-agriculture practices including hunting and gathering of forest and stream products. Water buffalo, cattle, pigs, chickens and dogs are important domestic animals for their livelihood and these valuable animals are often maintained close to human dwelling (http://www.nt2wmpa.gov.la/en/people-and-nature/). Such practices increase the risk of tick-borne disease transmission and other vector borne diseases. Furthermore, several forest workers and scientists working in this zone have been diagnosed and treated for rickettsial disease.  Mites and ticks are believed to be the vectors of these diseases and potentially other new emerging infectious diseases such as arboviral diseases. In order to assess tick-borne diseases in Lao PDR, an in-depth assessment of tick species and their pathogens was carried out.

Objectives
+ To describe species composition and distribution of the ticks in the research area.
+ To describe the ticks and their vector status (putative vectors for viruses, rickettsia and bacteria).
+ To develop vector map for ticks and tick-borne diseases in order to provide information on the diseases surveillance and control.
+ To develop local capacity building and competencies on ticks systematics/bionomics and tick-borne disease identification.

Sixteen participants from Department of Disease Control (Ministry of Health); CMPE; 103 Military Hospital; Military Institution for Disease Prevention and Control; and 9 provincial divisions of CMPE attended the course (Fig. 1). To our knowledge, this was the first-ever, intensive course dedicated to the taxonomic identification and vector biology of medically important arthropods to be conducted in Lao PDR.

Institut Pasteur du Laos: Medically important arthropod collection room
In order to preserve specimens for future research and training purposes, a room of medically important arthropod collection has been established with 2 Cornell Cabinets; with 20 drawers each for dry insect specimens such as mosquito adults and one cabinet for specimens preserved in ethanol and slide mounted specimens such as ticks, sand-flies, and mosquito larvae (Fig. 2).

Medically important arthropod collection room in the Institut Pasteur du Laos, with 2 Cornell Cabinets (brown) each with 20 drawers for dry insect specimens, and a cabinet (white) for specimens preserved in ethanol and mounted slides

Tick collection sites
In order to broaden our scope for tick collection and define hot spot areas in Nakai district, Khammoune province, we sampled as many sites as possible, according to the allotted time and logistic difficulties. We investigated the upstream and downstream forest areas of the Nam Theun, Nam Noy rivers, Markfueng and Korbong villages inside WMPA area, and Natan Village in Phou Hin Poun National Protected Area (Fig. 3).

The NNT NPA is under management by the WMPA authority. It is home to wide range of wildlife species including reptiles and amphibians (20 amphibian species, and 31 reptile species), more than 400 species of birds, 92 species of mammals (elephants, muntjac, deer, pangolins, etc.) (http://www.nt2wmpa.gov.la/ en/ecology/). Natan village is located in the Phou Hin Poun National Protected Area (Phou Hin Poun NPA) in Khammouane Province and enclosed by karstic limestone formations and forested mountains. Phou Hin Poun NPA is one of only two NPAs in Lao PDR covering representative samples of the Central Indochina Limestone. 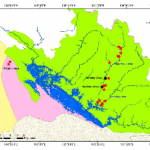 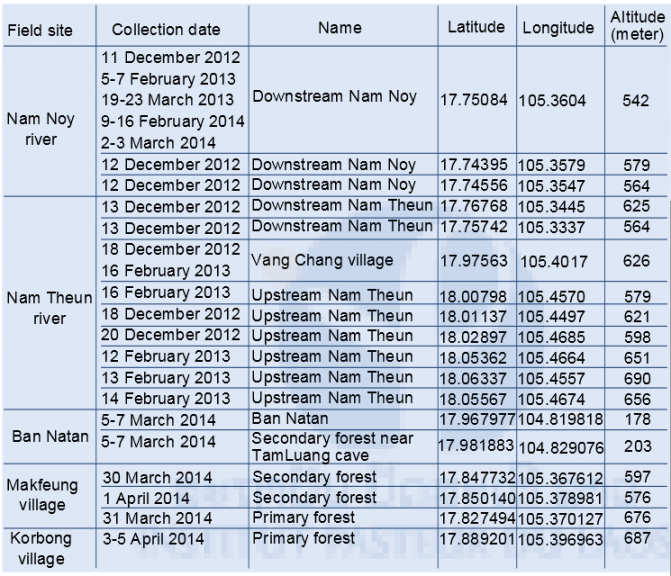 Tick sampling procedure
Dragging method was used for tick sampling from forest floor and vegetation. White heavy cotton sheets were cut into many sizes: 50 cm, 70 cm, and 100 cm widths X 100 cm long. These makeshift dragnets were swept along the forest ground at around 1-2 m long intervals around natural animal trailways before being examined for ticks. Ticks were removed from the sheets using forceps, transferred to 1.5 ml labeled cryo–tubes, and then transported to the Nakai field Laboratory (Ticks were also collected from some domestic animals by direct hand removal with forceps during our surveys).

In the Lab, ticks were killed by putting in the freezer -20°C for 10 minutes. Then adults, nymphs, and larvae of tick were separated, counted, and subsequently stored at -80°C for further analysis (species identification, pathogen detection, and discovery). All study sites were data-logged for full GPS parameters (see Table 1).

Tick identification
Ticks were identified and grouped under microscope in cooling conditions (on ice pack) by using reference determinations from Dr. Richard G. Robbins of the US Armed Forces Pest Management Board (AFPMB) and together with related keys from Japan, Korea and the Ryukyu Islands (Yamaguti et al. 1972), L. E. Robinson keys for genus Amblyomma (Nuttall et al.) and Thailand (Tanskull and Inlao 1989) for adults of Haemaphysalis ticks. As there are no morphological identification keys available for pre-imago forms of Haemaphysalis spp., larval and nymph stages in this genus were grouped by using their main morphological characteristics, especially the capitulum.

Laboratory procedure for pathogen screening
Sample preparation and RNA/DNA extraction
Tick samples were pooled in to groups of one to ten by species or genus, sex, stage of development, collection period, and site. Specimens were placed in a 1.5 ml vial containing 1 ml of 1X cold Phosphate Buffered Saline (PBS) and Lysing Matrix A zirconium beads (MP Biomedicals). Tick pools were homogenized for 10 min at a vibration frequency of 25/s in a TissueLyser II system  (Qiagen). After grinding, beads and tissues were spun down by centrifugation 5 min at 3000 rpm. Total nucleic acid (both DNA and RNA) for bacterial and viral detection by polymerase chain reaction (PCR), 100 μl of each pool were extracted and purified by using NucleoSpin® 8 Virus extraction kit following manufacturer’s protocol. The remaining 400 μl of each pool were stored at –80°C for pathogen isolation.

Reverse transcriptase polymerase chain reaction for viral screening
Multiple sets of primers have been selected and tested for screening arthropods specimens for the presence of flavivirus and alphavirus sequences by means of conventional nested RT-PCR as previously described (Sanchez-Seco et al. 2001 and 2005). In order to improve the sensitivity of the flavivirus screening, a real time RT-PCR system is under evaluation (Moureau 2007). As planned in the project, positive samples for any of these two arbovirus genera detected through an initial screening were re-analyzed by specific real time RT-PCR to attempt to identify the viral species. Such methods are already available for detection of the main arboviruses of human health concern in SE Asia: dengue (all serotypes), Japanese encephalitis, and chikungunya virus.

Virus isolation
Positive samples for any viral markers were inoculated onto both mosquito (Aedes albopictus derived C6/36) and mammalian (African green monkey VERO E6) cell lines. Briefly, sub-confluent cells monolayers prepared in 25 cm2 culture flasks were washed once with 3 ml of 1X DPBS.  After removing the washing solution, cells were inoculated with 100 Âµl of each positive pool supernatant diluted with 1 ml of cold culture medium filtered through a 0.22 Âµm Millipore filter unit. After two hours of contact, the inocula were removed and replaced by 5 ml of culture media completed by fetal calf serum. Cultures were maintained for 5 days and checked daily under a microscope for presence of cytopathic effect (CPE). Up to four blind passages were performed to follow up of culture negative for CPE. Cells and supernantant were preserved frozen at -80Â°C for a retrospective control of the culture by pan-flavi or pan-alpha RT-PCR.

Bacterial screening
To investigate the occurrence of Spotted Fever Group (SFG) Rickettsia in ticks in Laos a molecular screening approach targeting the 17kDa gene was taken (Jiang et al. 2004). In order to identify novel as well as known human pathogenic species a previously established and validated quantitative real-time PCR (qPCR) assay was adapted for the use with DNA from tick pools (Jiang et al. 2004, Mayxay et al. 2013). After severe inhibition of the qPCR reaction was identified in preliminary experiments the final protocol was adapted for the use with diluted (1:10) tick-DNA and the inclusion of bovine serum albumin (BSA) to minimizing the effects of inhibitors.

The validity of results was ensured by the inclusion of positive and negative results into each run. The possibility for cross-contamination was limited due tostrict physical separation of DNA preparation, pre-and post PCR areas as well as the use of uracil-DNA glycosylase.

+ We also thank Dr. Richand Robbins of the United States Department of Defense Pest Management Board and Dr. Pollie Rueda, Walter Reed Biosystematies Unit for their collaboretion and assistance 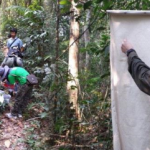 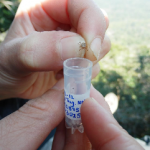