Hepatitis B virus in the Lao People’s Democratic Republic: a cross sectional serosurvey in different cohorts

Background
HBV is endemic in the Lao PDR, between 8-10% of blood donors being chronic carriers of HBV, and is the cause of high morbidity and mortality. It is believed that most infections occur during early childhood, e.g. during birth or early family life. If infected at birth, children have a 90% risk of developing chronic infection. This rate decreases to 30% if infected between the ages of one and five and to 5-10% if infected after the age of 5. As screening for hepatitis B surface antigen (HBsAg) in pregnant women and immunoglobulin prophylaxis in newborns are not widely practiced in Lao PDR, routine infant vaccination is the mainstay of the prevention of early childhood infection.

From 2001, there has been a phased introduction of HBV vaccine into the national immunization schedule. Currently, infants are scheduled to receive the HBV birth dose within 24 hours after birth, followed by HBV containing vaccine at 6, 10 and 14 weeks of age in combination with diphtheria, tetanus, pertussis and Haemophilus influenzae b vaccine (DTP- HepB-Hib). The birth dose of HBV vaccine, followed by the timely 3 dose schedule, is assumed 70 to 95% effective in preventing mother-to-child transmission of HBV. However, the HBV birth dose coverage in Lao PDR was only approximately 28% in 2011–2012, largely because the majority of births are unattended home-births (62% in 2010). Furthermore, due to the difficult access to healthcare for a large proportion of the Lao population, only 78% of children less than 1 year old received all three DTP-HepB-Hib vaccinations in 2011.

Activities and Prospective
We performed a cross-sectional survey in four different sub-populations from Lao PDR with different ages and vastly different access to vaccination and general health care; infants, pre-school children, school pupils and pregnant women. Among 192 infants aged 9 to16 months tested in the urban settings of Vientiane and Luang Prabang, only one carried HBsAg while 23 (12%; all were aged 9â€“10 months) were anti-HBc positive. Anti-HBc positivity, usually indicative of HBV exposure, may also be attributed to passive transfer of maternal antibodies  still detectable at this age. Importantly, the low HBsAg prevalence in the infants in our study may be seen as a positive impact of the vaccination policy implemented in the districts. This is also supported by the 59.9% seroprevalence rate of anti-HBs alone, reflecting an active, albeit low-level, immunization campaign in these areas. Our results show that vaccination coverage among infants even in the main cities of Luang Prabang and Vientiane remains inadequate. This is in line with the low vaccination coverage with the HBV birth dose (44-48%) and the DTP-HepB-Hib3 (80-85%) reported from these cities in 2011. It can be expected that in a rural setting the coverage is even lower.

Indeed only 13.6% of our pre-school children aged 1 to 4 years from rural settings in Huaphan province had anti-HBs antibodies alone, suggesting that very few children had been vaccinated. Distance from the nearest health centre was significantly associated with vaccination status, emphasizing the relationship between access and vaccination coverage (p = 0.01). In contrast 21.3% were anti-HBc positive, reflecting a prior exposure to HBV in this age group rather than passive transfer of maternal antibodies. Furthermore, 4.5% were HBsAg carriers as a result of early life exposure.

The school pupils in our study were recruited from semi-urban settings in Luang Prabang, Boulhikhamxai and Savannakhet provinces. Those aged 9 and under were born after the introduction of the HBV vaccines. The HBsAg prevalence increased from 4.3% (similar to the 4.5% in the under-fives in Huaphan province) in the 5 to 9 years old to 7.8% between 10 and 14 years. Assuming that most chronic infections are acquired during the first years of life, the lower HBsAg prevalence can be considered as the result of improved vaccination coverage. The increase of anti-HBc prevalence from 19.4% in the 10 to 14 years old to 27.0% in the 15 to 19 years bracket shows that HBV exposure continues and may even intensify after the age of 14 years.

The pregnant women in our study were recruited from urban areas of Luang Prabang and Vientiane. The high HBsAg prevalence of 8.2% in this cohort represents a high risk of vertical transmission of HBV and stresses the need to promote HBV vaccination of all children at birth, a strategy that has proved effective in many other countries within the region.

Lao PDR is heterogeneous in terms of vaccination coverage and access to healthcare. Because of geographical and ethnic heterogenicity and non-randomised sampling it is difficult and even not indicated to extrapolate our seroprevalence data to the entire Lao population. Nevertheless, we clearly show that there is a positive impact of HBV vaccine as evidenced by low prevalence of HBsAg in infants and school-children under 10 years i.e. those born after its introduction.

A significant improvement in immunization coverage of children would require strengthening routine outreach services, by mobile teams, especially in remote areas, paired with a strict management of the cold chain and reliable certification of vaccinations.

These data were presented at the Third National Workshop on Hepatitis, Vientiane, 3-5th November, 2014 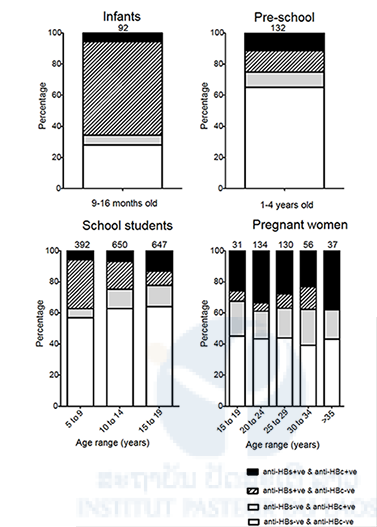 Figure 4: Hepatitis B seroprofile with age. Excluding 3 participants with no age data and 50 with equivocal anti-HBs data. Numbers above columns represent number per age group. 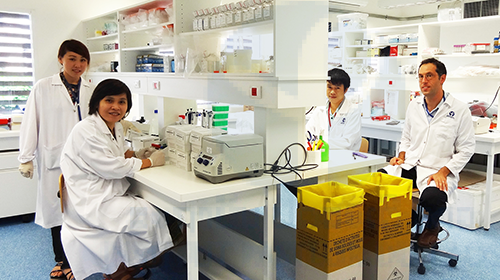