The main objective of our lab is to study the biology and ecology of arthropod vectors (mosquitoes, sandflies, ticks, snails, etc.), as well as the transmission cycles of the viruses, parasites and other microbial pathogens they transmit. Furthermore, we are working on ways to mitigate vector borne disease transmission  in Lao PDR via vector control training programs. 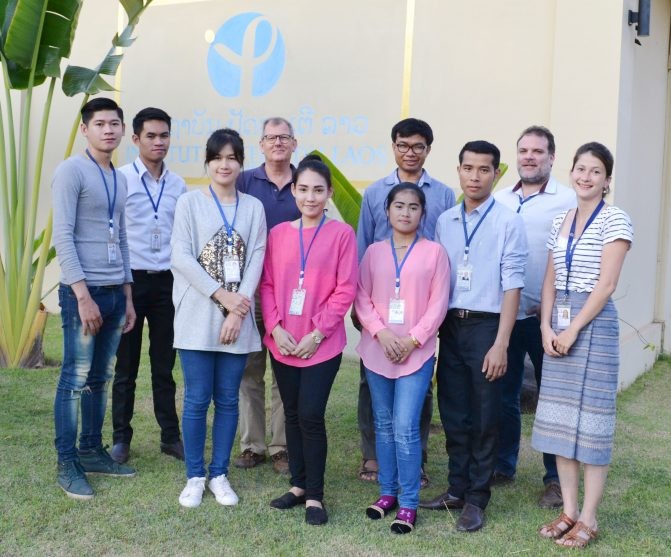 The Medical Entomology and Arthropod Vector Biology Laboratory at IP Laos is one of the most active Medical Entomology Labs in Southeast Asia and has gained significant recognition through its important publications over the past few years. Composed of 9 members and several outside collaborators, such as Dr. Ian Sutherland (US NMRC-A based in Singapore) and Dr. Vincent Corbel (IRD based in Bangkok) the team has been working thought-out Lao PDR from Bokéo to Attapeu on several projects studying various aspects of arthropod vector biology, bionomics, pathogen discovery, insecticide resistance, risks of disease transmission on several species of arthropods (mosquitoes, ticks & sandflies). The results of our research are provided on a weekly basis to the Department of Communicable Diseases at the Lao Ministry of Health (DCDC) The DCDC then use our results to implement public health policy.

This year we have completed several projects that are reported in the following pages. The ECOMORE Project financed by the French Development Agency (AFD) allowed us to explore the risks of vector borne diseases in rubber plantations in the Luang Pabang Province in Northern Laos. The results showed that many species of disease vectors are present in rubber plantation, the most prevalent being Aedes albopictus the vector of Dengue Chikungunya and Zika viruses.  Interestingly this vector is very well adapted to the rubber plantation environment using latex collection cups as breeding sites. Anopheles spp and Culex spp were also found. We also made risk comparisons between mature and immature stands, as well as secondary forest and villages. Based on our results, we also worked closely with Provincial Health authorities and the Lao Ministry of Agriculture, National Agricultural and Forestry Research Institute (NAFRI) to mitigate vector borne disease vector risks. During the ECOMORE project, the French Tire Company Michelin became interested in our research/public  program and via the Michelin Corporate Foundation they continue to sponsor our work in Laos and allowed us to carry out a “mirror study” in Cote d’Ivoire with the Institut Pasteur Côte d’Ivoire. This South-South Cooperation is unique and has greatly improved laboratory facilities and strengthened human resources.

Fortunately our study has  demonstrated that all primary malaria vector species in Laos are still susceptible to major insecticides. This is hugely important as it warrants the continued use of insecticide-impregnated bed nets.

IP Trap Project was focused on Speleo-medical entomology, to explore mosquitoes and sandflies in karstic caves and areas around limestone karsts. This project, funded by US GEIS and done in collaboration with US NMRC-A, yielded very interesting results on cave-dwelling sandflies and associated Phleboviruses. This project has stimulated a lot of interest in this unique and yet to be explored biotope. Interestingly, this study coincides with a strong political interest in Laos to develop ecotourism and incorporate cave visits for tourists.  Hence this type of study is very important to evaluate the risk that vectors and arboviruses pose to tourists entering caves.

Finally, the Heat-Trap Project again funded by US GEIS and carried out in collaboration with US NMRC-A, was to see if a portable heating device could improve the collection rate of mosquitoes in various laboratory and field setting. Unfortunately the increased mosquito collections were not significantly different with or without the heat trap.