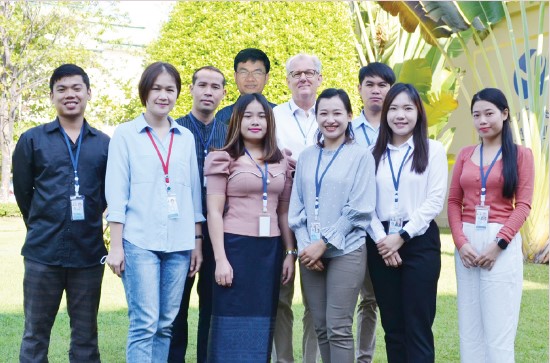 The main objective of our lab is to study the biology and ecology of arthropod vectors (mosquitoes, sandflies, ticks, etc.), as well as the transmission cycles of the viruses, parasites and other microbial pathogens they transmit. Furthermore, we are working on ways to mitigate vector borne disease transmission in Lao PDR via vector control training programs. Finally, we have expanded our response work to study the origins of SARS-like coronavirus in putative animal hosts.

In 2022, we continued our collaboration with the US Navy Medical Research Unit Two (NAMRU-2) in Singapore on Tick Map Five. This program is an extension of previous Tick Map projects that started in 2014.

In order to identify common and emerging vector-borne pathogens in Laos, IPL in collaboration with NAMRU-2 Singapore (SG) have established a study to assess the distribution and infection potential of vectors since 2014. Between 2021 and 2022, we continued to conduct tick and other ectoparasite collections in 2 districts, Luangnamtha province in the northern part of Laos. The vectors were morphologically identified and pooled. Nucleic acids were extracted and screened for panphlebovirus and pan-flavivirus by conventional nested RT-PCR at IP-Laos; Rickettsia spp. were detected by qPCR at the Lao Oxford Mahosot Wellcome Trust Research Unit (LOMWRU) and putative arboviral pathogens were detecting by Next Generation Sequencing (NGS) at the Institut Pasteur Paris (IPP).

A total of 2,748 samples of ticks and other ectoparasites were collected during the course of the study, of which 729, 1,146 and 873 samples were collected from first, second and third missions respectively. Six species belonging to 4 genera of ticks were collected from dragging and animals including A. testudinarium, H. hystricis, I. spp., R. haemaphysaloides, R. microplus, and R. sanguineus. Other ectoparasites – Trombiculidae and Haematopinidae – were also collected from only rats and animals. A total of 342 pools (2,498 tick samples) were screened for Pan-Phlebovirus and Pan-Flavivirus by conventional nested RT-PCR. None of them was positive. A total of 24 big pools containing 259 mini pools (1,707 ticks) were sent to IPP in August 2022 for deep sequencing of Arboviruses. Our IPP partner will conduct NGS on the 24 big pools. The results of NGS will be submitted by the end of November 2022. 124/125 pools were positive for Pan-rickettsia for Rickettsia spp. (17kDa by qPCR). Our partner, LOMWRU, will continue to try to identify the Rickettsia species. Our project continues to move forward with no currently observed problems or major obstacles. We will continue tick study/surveillance in Laos, especially in the areas that we did not sample before for both ticks and associated pathogens.

In order to extend our study on other vector borne diseases in Laos, we also set up SAND MAP project between 2022-2023 in collaboration with NMRU-2, LOMWRU, and IP-Paris. The aim of this program is to understanding of diversity of sandfly vectors and putative sandfly-borne pathogens such as leishmania and phlebovirus in Laos.

Phlebotomine sandflies serve as vectors for several established, emerging and re-emerging infectious diseases such as Carrion’s Disease or bartonellosis, leishmaniasis and sandfly fever. In Laos, data on the bionomics of sandflies and sandfly-borne pathogens are scarce. In order to provide data on putative sandfly vectors and sandfly-related pathogens in Laos, we will continue our field collection of sandflies. Sandfly samples that were already collected in previous years together with those that will be collected in the future will be identified morphologically and molecularly. Pathogens, such as arboviruses and leishmania, will be screened using molecular techniques and the Next Generation Sequencing. This study will provide new data on sandfly vectors and sandfly-related pathogens in Laos.

We also continue our investigation on the origins of SARS-CoV-2 and SARS-CoV-2-like viruses in karstic areas of Vientiane province. This study is an extension of a previous project that started in 2021. The aim of this program is to better understand the origin, natural history and dispersal of SARS-like- Coronavirues (CoVs) in their natural environment, as well as the mechanisms leading to their interactions and interspecies jumping: Bat-Bat; Bat-Animal and Bat-Human.

As shown in the Institut Pasteur du Laos (IPL) annual report in 2021, the closest bat coronaviruses to human SARS-CoV2 were found from samples collected in Feung district. The results showed that Laotian bat-sarbecovirus RBD was able to bind to human ACE2 through modeling and binding experiments, and Pseudoviruses expressing BANAL-20-236 spike could enter into cells expressing human ACE2. Further experiments such as investigating whether Pseudoviruses expressing BANAL-20-236 spike can directly entry into human cells, and pathogenicity of these viruses are warranted. The IP-Paris team will continue to study pathogenicity of BANAL-20-236 using an animal model.

Finally, in collaboration with our virology team, we set up a pilot project on “Investigation and Response to Emerging Viral Pathogens”.

This project aims to build sustainable local capacity in Laos to investigate and respond to emerging zoonotic viral diseases and reduce the threat of potential deliberate use of these novel pathogens.

The pilot project will build and foster scientific cooperation between Canada and Laos, and is coimplemented by IPL and the National Microbiology Laboratory of the Public Health Agency of Canada (see full report on the emerging virology laboratory).

+Mapping of Vectors and Reservoir Hosts in Laos (Tick Map 5)
+Mapping of Sand fly vectors and related pathogens in Laos.
+Origins, natural reservoirs and Interspecies transmission of SARS-CoV-2 and other SARS-like coronaviruses (ONRITS).