Origins, natural reservoirs and Interspecies transmission of SARSCoV- 2 and other SARS-like CoVs 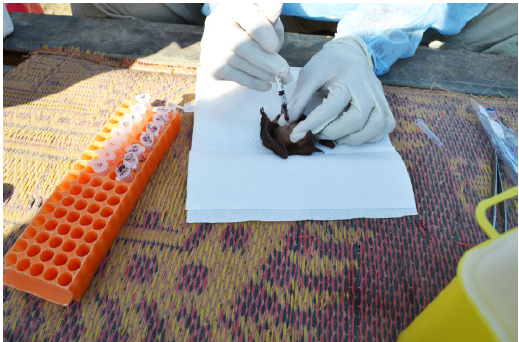 Since the discovery of SARS-CoV in Chinese horseshoe bats (Rhinolophus sinicus) in Hong Kong in 2005 (Dorsten et al. N. Engl. J. Med. 2003 348, 1967; Peiris et al., Nat. Med. 2004 10:S88), a plethora of molecular epidemiological studies have been carried out in bats and animal species around the world to detect other animal reservoirs of this highly pathogenic CoV (for Review Wong et al., Viruses 2019 11,174). Interestingly, of the >30 CoVs found in bats, a majority have been found in various species of horseshoe bats (Rhinolophus spp.) from China. A few others have been found in other bat genera such as Aselliscus, Chaerephon, and Hipposideros.

Given the fact that two SARS Coronaviruses have emerged and caused the important human loss of life in the past seventeen years (SARS and COVID-19), the scientific community postulates that other SARS Coronaviruses are presently circulating in Rhinolophus and other bat populations and could spill over into human populations like SARS and COVID-19; hence, the surveillance and identification of these novel putative coronaviruses is necessary to mitigate a new future pandemic.

A better scientific understanding of the origin, natural history and dispersal of SARS-CoV-2 and SARS-like- CoVs in their natural environment, as well as the mechanisms leading to their interactions and interspecies jumping: Bat-Bat; Bat-Animal and Bat-Human are paramount to mitigate future spillover events that result in devastating epidemics like the one we are witnessing today with SARS-CoV-2 in China and around the world.

The specific objectives of this project are to

i) assess the presence of SARS-CoV2 and related viruses in Laos and Vietnam wildlife (bats and other mammal communities at the interface with them);
ii) search for other SARS-like CoVs using New Generation Sequencing (NGS)-based metagenomic analysis of selected samples;
iii) detect past beta-coronavirus infections using specifically developed antibody tests for SARS-CoV2 and novel closely-related viruses.

This project will be conducted by teams from the Institut Pasteur du Laos (IPL) and the National Institute of Hygiene & Epidemiology (NIHE)-Vietnam, in collaboration with the Pathogen Discovery Laboratory at the Institut Pasteur. Both IP Laos and NIHE have extensive experience in safely collecting bats (appropriate biosafety training and PPE for collectors) and have Animal Care/ Ethics permits to collect bat biological samples. Oral and fecal swabs will be taken as well as blood. Urine will be collected from sheets of sterile plastic placed within specific zones underneath colonies. The state-of-the-art virology laboratories of IP Laos and NIHE will carry out viral detection, isolation and identification. Additionally, Next Generation Sequencing (NGS) will be used to analyze the virome and host origin of these samples in collaboration with the Institut Pasteur Shanghai- Chinese Academy of Sciences (finding their own budget in China) and the Pathogen Discovery Laboratory at IP Paris (applying to RIIP call under another project) to determine the presence of SARS-CoV-2 and to identify its natural host. This study will also allow us to detect other putative SARS-like-CoV-infected bats and to establish which specie(s) is/are serving as reservoirs

This project is expected to bring a plethora of new data concerning the natural history of SARS-CoV-2 and other SARS-like CoVs from their natural settings. We expect to identify new animal reservoirs (invertebrate and vertebrate) for SARS-CoVs and hopefully how these viruses pass from putative reservoirs to other recipient species. Given that Laos and Vietnam are major providers of live animals in Chinese wet markets an understanding of the up-stream events is key to mitigate future emergence of SARS-CoV-2 and yet unknown SARS-like-CoVs.

Activities have done so far at IPL in 2020

Training on biosafety prior to field bat collection

The training prior to fieldwork was organized once for 6 participants who join the fieldwork collection. The one-day training session was organized on 24 June 2020 at IP-Laos. The aim was to introduce participants to our SOPs and to the transmission risks of infectious agents that may arise from bats and how to identify, assess, and mitigate the risks, as well as to make participants better understand methods that could minimize the risks, and identify and practice the use of PPE suitable for the fieldwork.

Figure 1. Biosafety training at IPL prior to field investigation 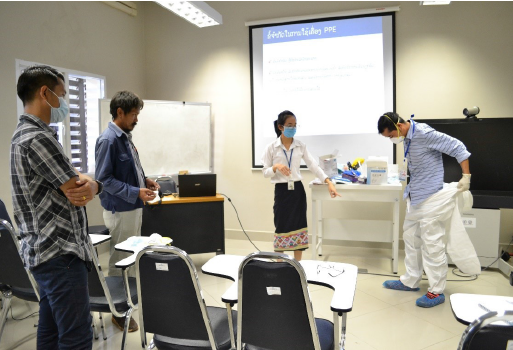 Our first field survey took place between 4 and 11 July 2020 in Feang District, Vientiane Province. Five locations from three villages in Feung District were selected for bat and rodent sampling. Our field mission was authorized by the Ministry of Agriculture and Forestry of Laos.

Bats were collected using four-bank harp traps (Francis, 1989) (Figure 2) and mist nets. Harp traps were set across natural trails and over small streams in the forest understorey, and at the entrance of caves in relatively concealed conditions. Mist nets were also set at similar places to harp traps but were more often used in open spaces. Both harp traps and mist nets were set before sunset; harp nets were left overnight. Captured bats were held individually in cloth bags. Species, sex, age (adult or juvenile), and reproductive condition (pregnant or lactating) were determined in the field. Species were identified following Francis (2008), Csorba et al. (2003), and Corbet and Hill (1992). Adults or juveniles were identified by the presence of unfused epiphyses of the phalanges and metacarpal joints (Brunet-Rossinni and Wilkinson, 2009). The reproductive status of female bats was determined by examining the nipples (Racey, 2009). Some external characteristics, including forearm length (FA), were measured using calipers and body mass (W) was taken using a Pesola spring balance. Most bats were marked with wing bands for individual identification and were released at the capture point within 12 hours. For each species, two or three specimens were collected to confirm identification. Bats were euthanized using chloroform. Specimens were fixed in 95% ethanol in the field and were transferred to 70% ethanol when they were brought back to the laboratory. All specimens were registered and cataloged in the Zoological Collection of the Faculty of Environmental Sciences, National University of Laos, Lao PDR. 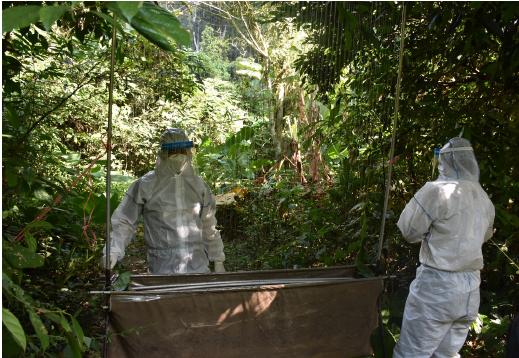 Bat species composition and abundance A total of 335 bats were collected, of which Family Hipposideridae was the most abundance (134/335), followed by Family Rhinolophidae (121/335). Overall, 25 species were identified belonging to 6 families. The most diversity was found in Rhinolophidae (10 species) followed by Hipposideridae (6 species). See Table 1 below. Only two mice were captured during our field mission. 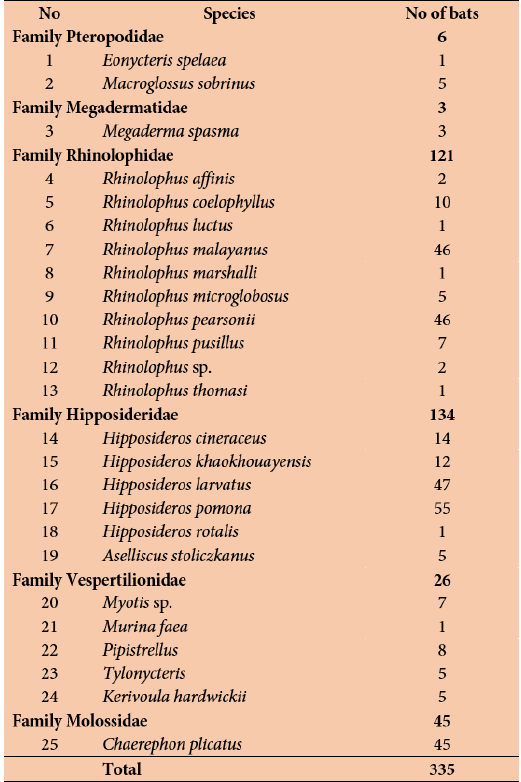 A total of 307 saliva, 289 anal/feces, 72 urine swabs and 157 blood samples were collected during the course of our mission. In addition, ectoparasites were also collected from 32 bats. Some environmental samples from caves, flowers and other insects were also collected (More detail on samples are now in progress).

• Continue our field missions for bat/other small mammal collections in December 2020 and January 2021 in the Northern part of Laos.
• More than 300 bats are expected to be more collected and sampled.
• Extract biological samples to be ready for NGS and phylogenetic analysis to search for SARS-CoV-2 and SARSlike- CoVs.
• Coordinate with our Vietnamese partners and share SOPs for sample collections and biosafety procedures.