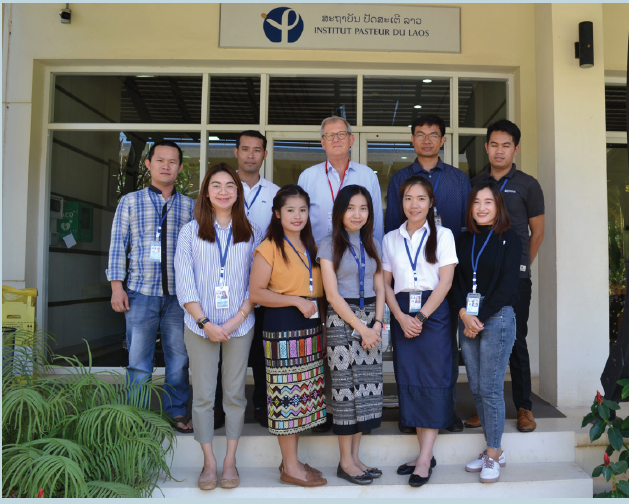 The main objective of our lab is to study biology and ecology of arthropod vectors (mosquitoes, sandflies, ticks, etc.), as well as the transmission cycles of the viruses, parasites and other microbial pathogens they transmit. Furthermore, we are working on ways to mitigate vector-borne disease transmission in Lao PDR via vector control training programs.

Like 2020, the ongoing Covid-19 pandemic this year (2021) has been greatly affected our research efforts in Medical Entomology and Vector-borne disease laboratory due to many lockdowns and mobilization of the Entomology staff to participate in Covid-19 diagnostics with the virology team.

In 2021, we continued our collaboration with the US Navy Medical Research Center Asia (NMRC-A) in Singapore on Tick Map Four. This program is an extension of previous Tick Map projects that started in 2014.

In order to identify common and emerging vector-borne pathogens in Laos, NAMRU-2 Singapore (SG) has established a study to assess the distribution and infection potential of vectors since 2014. Between 2020 and 2021, we continued to conduct tick and other ectoparasite collections in Oudomxay province in the northern part of Laos. The vectors were morphologically identified and pooled. Then nucleic acids were extracted and screened for pan-phlebovirus and pan-flavivirus respectively by conventional nested RT-PCR at IP-Laos; Rickettsia spp. were detected by qPCR at LOMWRU and arboviral pathogens were detected by Next Generation Sequencing at IP-Paris.

A total of 582 ticks and other ectoparasites were collected during the study. No tick samples were positive by panphlebovirus and pan-flavivirus screening. However, results from NGS of two big pools of Dermacentor and Haemaphysalis ticks found 4 viral families known to infect vertebrates including Rhabdoviridae (Yongjia tick virus 2), Reoviridae (Rotavirus), Flaviviridae (Jingmen tick virus), and Unclassified Riboviria (Bole tick virus 4). 121/192 pools were positive for pan-rickettsia for Rickettsia spp. (17kDa by qPCR). However, none of them was positive for R. typhi/Coxiella spp. Our partner, LOMWRU, will continue to try to identify the Rickettsia species. Furthermore, another partner at IP-Paris will continue to perform deep sequencing on the samples collected in the course of this study.

From 2021-2022, we will continue our tick study/ surveillance in Laos for both ticks and associated pathogens. Future research studies are needed to determine the pathogenicity of these viruses to livestock and humans in Laos.

With the advent of Covid-19 we set out to investigate the origins of SARS-CoV-2 and SARS-CoV-2-like viruses in karstic areas of Vientiane and Oudomxay provinces.

Since the discovery of severe acute respiratory syndromeassociated coronavirus (SARS-CoV) in Chinese horseshoe bats (Rhinolophus sinicus) in Hong Kong in 2005, a plethora of molecular epidemiological studies have been carried out in bats and animal species around the world to detect other animal reservoirs of this highly pathogenic CoV (Wong et al., 2019). Interestingly, of the >30 CoVs found in bats, a majority have been found in various species of horseshoe bats (Rhinolophus spp.) from China. A few others have been found in other bat genera such as Aselliscus, Chaerephon, and Hipposideros.

Given the fact that two SARS Coronaviruses have emerged and caused important human loss of life in the past seventeen years (SARS and COVID-19), the scientific community postulates that other SARS Coronaviruses are presently circulating in Rhinolophus and other bat populations and could spill-over into human populations like SARS and COVID-19; hence, the surveillance and identification of these novel putative coronaviruses is necessary to mitigate a new future pandemic.

A better scientific understanding of the origin, natural history and dispersal of SARS-CoV-2 and SARS-like- CoVs in their natural environment, as well as the mechanisms leading to their interactions and interspecies jumping: Bat-Bat; Bat-Animal and Bat-Human are paramount to mitigate future spillover events that result in devastating epidemics like the one we are witnessing today with SARS-CoV-2 in China and around the world.

Our study showed that 25 coronaviruses were detected from 10 bat species (out of 539 samples tested), of which 3/5 sarbecoviruses with full-length sequences were closely related to SARS-CoV-2 > 96%. Preliminary results showed that Laotian bat-sarbecovirus RBD was able to bind to human ACE2 through modeling and binding experiments, and Pseudoviruses expressing BANAL-20-236 spike could enter into cells expressing human ACE2.

Further experiments such as investigating whether Pseudoviruses expressing BANAL-20-236 spike can directly enter into human cells, and pathogenicity of these viruses are warranted. Other questions will need also to be addressed such as whether the bat-exposed local populations have been infected by one of these viruses in Laos, whether such infections were associated with any symptoms, and whether exposure can confer immunity against subsequent SARS-CoV-2 infection.

Our preliminary results showed that there exist other bat sarbecoviruses that seem to have the same potential for infecting humans in Laos. People with close contact with bats seem to be at risk of being exposed, so they will need some level of personal protection if they have contact with the bats.

Finally, we continued to explore the field of insecticide resistance, which poses a conundrum between environmental safety and reduction of vectors and hence the diseases they transmit.

Targeting adult mosquitoes with pyrethroid insecticides (PYR) such as deltamethrin constitutes the first line of defense to limit vector-borne disease outbreaks. However, mosquitoes have evolved effective resistance mechanisms to resist insecticides. PYR resistance is widespread in Ae. aegypti and reduces the efficiency of mosquito control in several tropical regions including French overseas territories. Recently resistance has also been reported in populations of the tiger mosquito Ae. albopictus located in various continents including southern Europe and La Réunion island. Considering its expanding distribution and its growing importance in arbovirus transmission, the rise of PYR resistance in this species represents a major public health concern.

In this context, the TigeRisk2 project will break through scientific and technological barriers for characterizing novel DNA markers of PYR resistance in the tiger mosquito Ae. albopictus and track them in natural mosquito populations in order to evaluate the risk of resistance emergence in this species. For achieving this, the consortium will gather 5 complementary teams and combine field mosquito collections with long-term laboratory experiments and state-of-the-art molecular technologies.